The Czech government has moved to address one of the frequent woes of foreign tourists in the Czech Republic –losing money in a disadvantageous exchange rate transaction. Under the approved amendment to the Foreign Exchange Act, multiple exchange rates will no longer be allowed and clients will be able to withdraw from a disadvantageous transaction within two hours of making it. 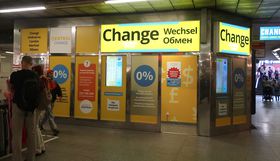 Photo: Lenka Žižková Tourists looking to exchange money in Prague don’t have to go far, there are exchange booths and money changing machines at every corner. However poor regulation of this business, multiple exchange rates and hidden commission fees often result in tourists feeling they have been ripped off. Under the present regulation once the transaction has been concluded and the money has changed hands there is no recourse.

Now the government has approved a series of changes to the rules for exchanging money aiming to protect clients. Under the proposed amendment, a client will have the right to withdraw from a transaction of up to 1,000 euros within two hours of exchanging the money. Should the respective booth or office be closed the client has six months in which to address the situation.

While most Czechs who use exchange offices are aware of the pitfalls, foreigners are often confused as to the conditions elsewhere and make a fast and bad decision on the spot. Prime Minister Andrej Babis said the proposed changes should protect clients from losing money in this way and improve the Czech capital’s reputation.

The changes also apply to bank machines, since clients wanting to reverse their decision would have three days to go to a regular office of the given machine operator.

Exchange booths will no longer be able to advertise multiple or VIP exchange rates, and will only be able to post one rate. And there should be no commission fee so that clients will be able to calculate exactly how much they would get without being surprised by hidden fees. The measures were proposed in cooperation with the Czech National Bank which supervises exchange offices.

The respective amendment will now go to the lower house and Senate for approval and will need to be signed by the president before coming into force.