The Czech Ministry of Industry and Trade, after consultation with the Finance Ministry, has recommended that state-controlled power company ČEZ take the lead in building new nuclear plants in the country. The ministry outlined three options for future nuclear development in its proposed action plan which was finalized on January 16. 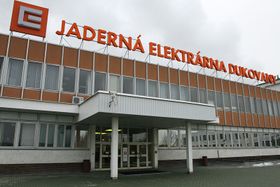 Photo: Tomáš Adamec The option for near 70% state owned ČEZ, through a newly-created daughter company, to pilot future construction and operation of at least two nuclear plants is described in the plan as the clear favourite for the state. Should that not be possible then a consortium of companies, such as ČEZ, the supplier of the main nuclear unit, and a financial investor or investors, for example, would be the next best option. A third option where a newly created state company would take over responsibility for construction would be the least favourable scenario, it adds.

The plan recommends that the Czech Republic should push ahead with the construction of at least two new nuclear reactors at the current sites at Dukovany and Temelín. Construction costs for the two reactors are estimated at 250 to 300 billion crowns, around 10.4 to 12.4 billion US dollars. An option should be considered for one further reactor at either of the sites, it adds.

The plan also urges that ČEZ be charged with carrying on preparatory work for the two new nuclear reactors. A decision on whether some sort of state guarantee for electricity prices or other guarantee to allow construction will probably have to be taken by 2025. By that it should be clear if current low electricity prices have recovered and are likely to firm further, the plan explains. The target should be for at least one new nuclear reactor to be completed at the Dukovany site by 2037, when the first of the existing four units currently operating there are likely to close, it adds. The proposed plan was put forward for inter-governmental discussion on January 16. Its approval will be linked to that of the Czech long term energy policy, which is now expected to be finalized by the government by the end of February.

Plans to expand the Temelín plant were originally put on hold in April after the Czech government refused to provide state guarantees for the price of electricity generated by the new units. A consortium led by Russia’s Atomstroyexport and the US-based firm Westinghouse were the sole bidders in the discontinued tender, after the French company Areva was disqualified. In July, the Korean government said the state-owned electric firm KEPCO will take part in a new tender.

In September, China’s First Deputy Prime Minister Zhang Gaoli announced in Prague that Chinese firms would also like to participate in the bidding. Chinese companies are building nuclear reactors at home, and have also started targeting opportunities abroad, most recently in the UK, Brazil, and South Africa. Although some politicians at the time expressed concerns over energy security, saying they preferred if any future deal were to go to a firm based in a NATO-member state, the news that Korean as well as Chinese firms would like to take part in a future Temelín bidding was welcomed by senior Czech coalition figures.