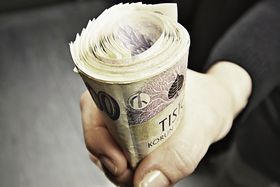 The overall amount of high-risk debt, where clients failed to pay off at least three instalments in a row, has been decreasing for four years in a row.

“We can see two positive trends associated with the long-term decrease of the overall amount of unpaid loans and both of them are linked to the economic situation in the Czech Republic. “First of all, the number of people having trouble repaying household loans is decreasing, and second, the average unpaid amount is getting smaller,” executive director of the Banking and Non-banking Credit Register Lenka Novotná told the Czech News Agency.

At the moment, every person with a housing loan owes on average 1.55 million crowns, while the average short-term loan has reached 183,000 crowns.

The Czech National Bank has sounded the alarm in recent months over the risk of Czech house buyers taking on too much debt and tightened mortgage rules as a result.