Czech Industry grew at a strong pace in June

Czech industrial production in June rose by 8.1 percent compared to the same period last year, particularly thanks to the continuing high output of the automobile industry, with electrical equipment manufacturers also registering success. The figures, released earlier on Wednesday by the Czech Statistical Office, are an improvement to May’s 2.5 percent growth which was lower than expected by analysts. 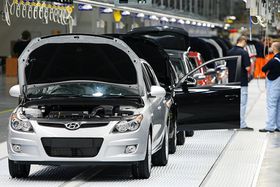 Photo: Tomáš Adamec The automobile industry, the traditional vanguard of industrial growth in the Czech Republic, continued its successful year with a 15.1 percent surge in production in June. The largest Czech car manufacturer Škoda Auto’s operating profits grew by almost three quarters to 11.7 billion crowns in this half year according to Volkswagen Group’s announcement last Friday. But it wasn’t only the automobile industry which registered strong growth last month. Electrical equipment manufacturers, along with rubber and plastic producers also registered growth exceeding 10% in June.

"Industry remains the main force behind the Czech economy and, thanks to its growth, is creating new jobs. Employment in this sector is growing by 1.7 percent year-on-year and thus is helping improve the situation on the Czech job market.", ČSOB bank macroeconomic director Petr Dufek stated on ihned.cz.

The growth in production was complimented by an almost 20 percent rise in foreign industrial orders compared to the same month last year, with domestic orders rising by 10 percent. But while the numbers indicate a bright future for the next few months, Czech companies could be sobered by the drop in orders suffered by their German neighbours this June. There, the German Federal Statistical Office announced a decrease in foreign orders of 4.1 percent, the biggest decline in orders in three years. Given the interconnectedness between Czech and German industry this could impact Czech firms as well along with the already anticipated Russian backlash on EU sanctions, which is expected to hit manufacturers particularly hard.

The construction industry is also doing better than it did in May, registering a year-by-year 5.1 percent rise in June, according to a separate report published by the Czech Statistical Office today. This is particularly due to an increase in the construction of new flats and the revitalization of many projects created before the economic crisis hit the country six years ago. Civil engineering projects are also on the rise, growing by 7.6 percent in June. However, current construction industry output is still almost 30 percent behind that of pre-economic crisis June 2008. 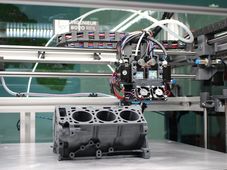 Study: Czech Republic best country in Europe in which to expand production

Among all the states in the EU, the Czech Republic has the most favorable conditions for the expansion of production, according to…