The Czech Republic is likely to face a shortage of pilots in the near future, the daily Hospodářské noviny warned on Thursday. Dozens of pilots have been switching to Arab and East Asian carriers, who pay them more than local carriers, and there are no young pilots to fill the vacancies. 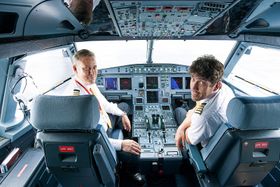 Photo: Czech Airlines According to the daily, young pilots have been discouraged mainly by high costs of obtaining pilot licences. The procedure of getting a license, which includes a long instruction course and training on a specific type of aircraft, costs about two million crowns and the applicants have to pay it from their own pockets.

Another factor forcing Czech pilots to leave is local legislation, which bans them from doing their job as a private business. Under the Czech rules, pilots can only have employee contracts while the foreign air carriers let them choose the types of working contracts they can sign up to.

The Czech Airlines Pilots Association, supported by airlines ČSA and Travel Service, the biggest Czech air carrier, has proposed a draft amendment to the civilian aviation law in order to enable pilots to opt for a more advantageous self-employed status.

The proposal has won the support of Transport Minister Dan Ťok, but it is still opposed by Labour and Social Affairs minister Michaela Marksová, who insists that pilots are only employed as regular employees.

Some critics have also warned that self-employed pilots are likely to take one job after another without taking a break, which could result in risky situations and threaten safety, the daily says.

The new bill’s goal is not to increase pilots’ incomes to remove the financial barrier for young pilots and make the profession accessible to a wider range of people in the Czech Republic, ČSA spokesman Daniel Šabík told Hospodářské noviny.

Six years ago, there was still a surplus of pilots in the Czech Republic but the national carrier Czech Airlines was forced to make many of them redundant as part of a radical restructuring programme.

In reaction to the pilot’s departures, Czech air carriers have started filling the vacancies with foreign crews from countries such as Morocco or Mongolia. Some have questioned whether that as well does not raise safety issues.