The Czech Republic appears to have patched up strained relations with China and at a major investment conference in the Latvian capital, Riga, it was again business relations that took the centre stage. And the Czech prime minister believes he has landed commitments that will help boost the Czech aviation sector. 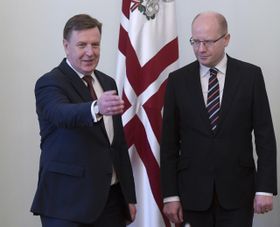 Latvian Prime Minister Maris Kucinskis welcomes Bohuslav Sobotka at CEE summit in Riga, photo: CTK All smiles and handshakes. That was the public message at least from Czech Prime Minister Bohuslav Sobotka as he met his Chinese counterpart Li Keqiang in the margins of a summit between China and leaders from the Baltics, Balkans, and Central Europe in the so-called 16-plus one framework at Riga, Latvia.

“What we agreed on today is that we are going to continue with the specific plan for cooperation which shows that Czech-China relations are good.”

The recent internal political row - after some Czech politicians allegedly broke ranks and met with the Tibetan spiritual leader, the Dalai Lama, and China, apparently in a tit-for-tat reaction cancelled a visit by Czech agriculture minister Marian Jurečka – is, according to Sobotka, water under the bridge.

That was not apparently the case with neighbouring Slovakia, whose prime minister, Robert Fico, reportedly found that a meeting with Li Keqiang was cancelled in retaliation for the Slovak president’s meeting with the Dalai Lama.

China and Central and Eastern European Countries prime ministers pose for the media after the Economic and Trade Forum summit in Riga, photo: CTK And as well as smoothing over China sensitivities over Tibet, the Czech prime minister appears to have won a promise that Prague will host a major meeting focused on boosting aviation exports to China in 2017.

The focus on the Czech aviation industry is not a surprise. Many companies in the sector have rebounded in recent years and are tied into the production plans of some of the biggest companies worldwide, such as Airbus, Embraer, and Italy’s Finmecannica.

But there has been a downside too from such international exposure for some companies. Aircraft Industries, based at Kunovíce in the far east of the country, has suffered a sharp drop in demand from one of its main markets, Russia. This year there were fears that the Russian owner would end production in the Czech Republic and shift it to Russia. Assurances have been given that will not happen but the company is reported to be a takeover target for both the biggest domestic based aviation company, Aero Vodochody, and a Chinese investor. 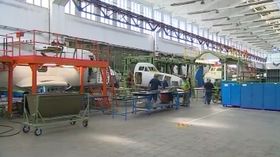 Aircraft Industries, photo: Czech Television The Czech government and the state inward investment agency, CzechInvest, are also focusing a lot more on the civil and military defense sectors as areas where skilled and relatively high paid jobs could be encouraged. The government faces the headache that while the overall unemployment rate is one of the lowest in Europe, many Czechs are still working in low paid jobs with pay packets around a third or even a quarter the size of those in neighbouring Germany.