A seemingly innocuous memorandum with an Australian mining company about exploitation and processing of some of the Czech Republic’s biggest lithium reserves is now in the spotlight on the eve of parliamentary elections. Some parties are calling for a special session of parliament to be held so that accusations can be aired. 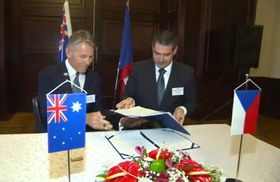 The memorandum was signed on October 2 in the northern city of Ústí nad Labem with the Social Democrat minister Jiří Havlíček representing the government. It basically aimed to set the stage for European Metals to start exploiting the lithium and tin reserves at Cínovec on the northern Czech-German border. The aim was also expressed of keeping as much processing and future jobs in the region as possible.

But less than two weeks before Czech parliamentary elections, the memorandum is now the centre of a political battle with Havlíček and the Social Democrats coming under fire for allegedly selling out national interests. The minister says the memorandum was designed to safeguard as much value added work in the country as possible.

One of the ANO leader’s main charges expressed on Monday is that the deal with European Metals opens up the Czech Republic to a possible international arbitration case which could end up costing it tens of billions of crowns:

"Why is this memorandum dealing with an agreement between the Czech Republic and Australia about the protection of international investments? Why is that there? Why are we doing this and possibly creating another mega-arbitration on the lines of Diag Human when another reasonable government could come along and stop it. Why are we doing this with a company about which we know nothing? Minister Havlíček should explain this. If he cannot, then I will personally start criminal proceedings."

Andrej Babiš, photo: Filip Jandourek The Diag Human case refers to a more than 20 year old legal battle between the government and a Swiss based health company over deliveries of blood plasma which, according to some court rulings, could cost the Czech government around 13.5 billion crowns.

The ANO leader maintains that the Czech state owned mining company Diamo, which managed uranium mining in the country, could easily extract lithium and other rare minerals at Cínovec as well but there was not the political will to pursue this option.

And environment minister Brabec hit back at Social Democrat claims that he signed up to an extension of European Metals’ exploration license, saying that under the current law responsibility for exploitation is shared between the environment and industry ministries with that former having no power to take another other decision.

It’ estimated that Cínovec could have the biggest lithium reserves in Europe and the fourth biggest in the world which are not sited in salt flats. The mineral is highly coveted as one of the main materials used in highly performing batteries for electric cars.