More and more Czech women are opening their own e-shops, according to a survey by the company Shoptet, providing a platform for some 13,000 online stores. Citing the findings, every sixth e-shop on average is owned by a businesswoman rather than businessman, Czech Radio reports. For many, opening an online store begins from a hobby, anything from clothing for pets, to doll collecting or board games. Gradually, their passion becomes their business. 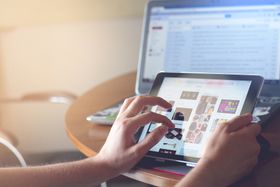 Photo: fancycrave1 / Pixabay, CC0 Blanka Smolčáková told Czech Radio she got into business purely by accident, after her dog gave birth to 12 pups. The problem? While not exactly 101 Dalmatians, the puppies became impossible to distinguish; worse, the dog owner learned, there were very few different dog collars, which could have helped, available on the market. So she began designing her own and eventually began putting them up for sale. Interest grew to the point where the money became worth it; currently she produces roughly 1,000 collars a year. The business is not her main income, she’s a nurse, but every little bit helps.

Petra Plemlová, a teacher at nursery school and a mother of four, also opted for her own internet shop as the floorplan on which to build her business, selling children’s clothes and cloth diapers. Since then, having created her own site, adding graphics and edited videos, she has added toys and designer fabrics. Now she owns not one, but two online shops.

The marketing director for Shoptet, Radek Hudák, confirmed to Czech Radio that the last two years or so had seen a big jump in e-shops offering items for babies and toddlers, sometimes handmade by mums.

The head of the country’s Association of E-Commerce (APEK) Jan Vetyška maintains that when it comes to the number of e-shops owned and run by women, the Czech Republic is ahead of the European curve. One reason, he said, was because sites like amazon or E-Bay do not have the same market saturation here as elsewhere. According to the association, the Czech Republic has some 36,000 e-shops, putting it among countries with the highest number of e-shops in Europe.