Free movement of people is one of the basic ideals of the European Union and a principle frequently voiced and defended by the Czech political elite. 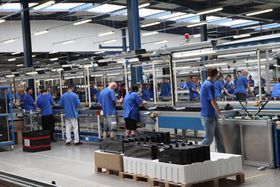 Illustrative photo: archive of Czech Government But the Czech Republic has now come under fire for failing to live up to some of the commitments that come with the principle. Namely, the Czech government has been seriously foot dragging on passing laws which would guarantee rights for foreigners working in the country.

The specific rights which should be stated and upheld in national law are those not to be discriminated against on the grounds of nationality in terms of employment, pay, and working conditions.

Czech laws should have moved to create or designate an office or body to support these rights and provide support for foreign workers and take measures to ensure that these rights are made known and that legal access is made available to enforce them when they are broken or ignored. The deadline for action to have been taken was May, 2016.

In spite of increasingly urgent reminders, the Czech Republic has not taken steps to implement the directive at all and the European Commission has now moved to take the country before the European Court of Justice.

It has also seeking a 33510 euros a day fine on the Czech Republic from the court until the rules are correctly transposed into national law.

Fellow offender, Luxembourg, was deemed to have only partially put the required measures into force in its national legislation and was subject to a lower proposed fine of 6528 euros a day until it rectifies its mistakes.

The Commission points out that freedom of movement is one of the biggest advantages of the EU Single Market with eight out of 10 citizens backing the principle.