Czech TV: Up to 80 percent of average net income goes to paying rent

Monthly rent costs Czechs as much as 80 percent of their monthly net salary, according to Czech TV; the public broadcaster cited numbers from Numbeo.com. In neighbouring Poland and Slovakia, renters have to set aside even more. 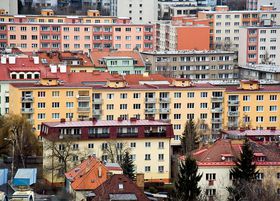 Photo: Filip Jandourek Rent depends on where exactly you’re living, in the city centre, the suburbs, in the capital or a small town. On average, in the city centre, Czechs pay as much as 80 percent of their net monthly income for rent. If you make between 20,000 – 22,000 crowns after tax and a three-room apartment in Prague can easily cost 16 – 18 thousand crowns per month, there isn't much left over. More often than not, rent is shared by partners, married couples, or in other case students and young professionals. For those renting, the situation is not likely to get any easier: the rent of three-room apartments, for example, has gone up more than 15 percent over the last two years alone.

The public broadcaster spoke to one Prague resident living in a two-room apartment with not one but two other people to make ends meet: one, his girlfriend, the other, a friend. That division allows them to live at what Czech TV described as a “lucrative address”, each paying around 6,000 crowns per month.

A three-room apartment would cost even more, as much as 22,000 crowns per month. That is significant because it is a sum which is higher than the average net monthly wage. The person featured on Czech TV wasn’t complaining, indeed he told the broadcaster the choice was more or less obvious, saying there was no way the three would be able to live in that part of town otherwise. He said he preferred sharing the coast, with each paying less to be able to live at “a nice spot”.

That of course is a solution that won’t suit everyone but there isn’t much they can do about it, unless they bring together capital and have a mortgage approved and buy. As it stand, rent is currently going up across all categories: single-room flats, two-room apartments, family homes. Two-room apartments, probably among the most-sought, have risen the most. The rise mirrors apartment prices in general: even to buy has gone up around 15 percent over the last two years after a lull in the market for several years after the global economic crisis.

Right now it is largely a seller’s or rentier’s market: Czech TV reported that it takes real estate agents only around two weeks to successfully rent off apartments, with owners not having to rent to the first-comer but being able to choose from more interested parties.