Czech unemployment rate unlikely to be dented until 2015

A raft of statistics on Thursday represented good and bad news for the Czech economy with the worst being being that there is little hope for a sharp short term drop in unemployment. 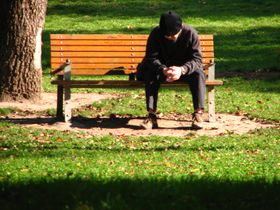 Photo: Kristýna Maková The good news was that the recovery in industrial output strengthened in November while the inflation figure for December, of 1.4%, is still well below the central bank’s upper limit. Added to that, third quarter GDP showed slight growth on the previous three months, helping to banish worries that the economy might dip again into recession.

The bad news was on unemployment, with the national jobless total now just under 600,000. The ugly aspect is that this will not be going down any time soon.

The latest ministry method of calculation the ratio of those seeking work as a proportion of the active population puts the unemployment rate at 8.2% in December, up from November’s 7.7%.

If the calculation methods applied as late as 2012 were still in force, the latest monthly rate would look even worse at around 10.3%. Even that methodology represented a ‘massaging’ of the jobless figures compared with the calculations in force before 2004.

Perhaps another number is more telling: in November the number of vacant posts fell by 6.2% to 35,178. Put another way, there are on average 17 applicants chasing every job. In the worst unemployment black spot of the country, Karviná, that proportion rockets to over 80 jobless per position. It is little wonder that the Czech Cabinet approved a proposal on Wednesday to quadruple the incentives for jobs created in the country’s worst unemployment areas. These could now rise to a maximum Kč 200,000 per job. One condition is that the new post must be filled for at least five years for the employer to get the full pay out. The Cabinet move comes with a series of major layoffs in the east of the country region, such as the closure of a coal mine by OKD, still awaited.

The harsh economic facts are that whatever the good news on GDP, inflation, and manufacturing output, these will take time to convert into new jobs and lower unemployment. Just as employers cut overtime and temporary jobs when times get hard, they usually boost overtime but make do with the existing workforce when there are signs of an upturn.

That’s one reason why Prague-based brokerage Patria Finance expects the rate of unemployment to stand at the same 8.2% level at the end of 2014 as it was 12 months earlier even though it is firmly convinced that the economic recovery is underway. The brokerage does not expect any real improvement in the jobs figures until the start of 2015.

According to one school of economic theory it takes three percentage points of improvement in economic productivity to result in a single percentage drop in the unemployment rate. Some economists see the ratio at little more optimistically as 2:1. The upturn in employment is reckoned to be more rapid in the most open and less regulated economies where employers have fewer fears about hiring. European economies, including the Czech one, are not usually put into that bracket.