Workers of the world unite! A stirring rallying cry which in reality often failed to cross borders. But Czech unions now appear to have won allies for their campaign to hike local wages on the grounds that the same work should be earning the same reward irrespective of where it is taking place. 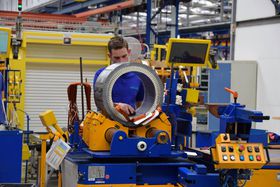 Photo: Michal Polášek Business daily, Hospodářské Noviny, reported Wednesday how the head of the biggest German grouping of trades unions, the German Trade Union Confederation (DGB), Reiner Hoffmann, has supported the principle that workers in factories bordering Germany should have the same conditions as those in Germany. DGB groups eight unions with a membership of around 6.0 million in total.

The German trades union bosses should appear in person at the Bohemian and Moravian Czech and Confederation of Trades Unions (CMKOS) September conference to give their personal backing to the campaign against low wages in Central Europe and so-called social dumping in the newer EU member states.

Germany is overwhelming the Czech Republic’s biggest single trading partner with German multinationals, such as Volkswagen, Siemens, and Bosch, some of the biggest foreign investors and employers in the country. The cross border wage differences in such cases are fairly easily comparable together with the productivity and profits of individual plants.

Economic experts say the German union support for higher wages in the Czech Republic and other lower wage cost locations is understandable and will help them deal with the risk of their own wages being undermined or more jobs being de-localised further east.

The Czech confederation already has close links with its Slovak counterpart, which recently took up the Czech movement’s campaign to end low pay. The two confederations also cooperate closely on comparing their negotiating stand for annual pay increases and the eventual awards and conditions offered by the same multinationals or similar companies operating in both countries.

For instance, the short lived strike at Bratislava’s Volkswagen plant and the eventual concession of a 14 percent pay increase was taken as likely to be inspirational for Czech workers at Škoda Auto’s Czech factories when they start negotiating a new wages and conditions package at the start of 2018.

Czech average wages are around a third the level of those in neighbouring Germany although productivity across the board is around two-third of German levels. There are, however, wide differences in the productivity across different sectors of the Czech economy with many businesses in domestic hands having a poorer performance according to a Czech government review of wage differences.