A Czech company is flying high just two years after being created. Primoco UAV produces mid-sized unmanned aircraft used to survey oil and gas pipelines, create 3-D maps, or for monitoring borders. And over the next month it plans a stock exchange launch to fuel its development.

Photo: Primoco UAV Primoco UAV SE was only created in 2015. One of its co-founders and the majority owner, a Czech pilot with 20 years experience, Ladislav Semetkovský, was inspired by the prospects for mapping Russia’s vast tracts using unmanned aircraft for the energy sector.

And he quickly started work developing an aircraft that could fit the bill and operate at a fraction of the cost of manned helicopters or light planes. The motors have also been development specially for the unmanned plane.

The plane’s body is just under four metres with the wings five metres long. The operator launches and lands it and can guide it using signals for around 200 kilometres though the plane itself can stay in the air for around 10 hours and cover 1500 kilometres.

Two years after the company was created, series production of the plane is already up and running in Prague. Contracts have already been signed for 14 aircraft with orders in the pipeline for 130 aircraft destined for 14 countries. A typical order is likely to be two or three aircraft for around 1 million euros. The overwhelming majority of the aircraft is built using Czech suppliers.

Semetkovský described how the unmanned aircraft stands out from the rest:

ʺBasically we have developed an aircraft which until now did not exist or for which there were very few manufacturers. On the one hand there are electric multiCopters and electric aircraft and on the other hand there are the very big unmanned military aircraft which, for example, are produced by the US and Israel. We have entered the so called mid-size segment where there is very limited competition and we are now the biggest commercial unmanned aircraft producer.ʺ 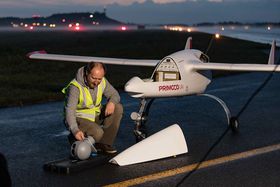 Photo: Primoco UAV But the current rented production site in Prague and facilities are a brake on the company’s take off on what is seen as a very fast expanding market. That’s why Primoco has been working since last November on a launch of the Prague stock exchange’s START market, aimed at encouraging investment in small and mid-sized companies. That launch is expected to take place in the next weeks.

ʺThe proceeds from the stock exchange emission will be used to build our own construction hall and runway. At the moment we are producing and our production capacity is limited to 50 aircraft a year. With the new factory we hope to produce 250 aircraft a year.ʺ

The main export targets are Russia, the Middle East, Asia, and South America. Primoco hopes to be producing around 250 aircraft a year soon after 2023.

Prague’s stock exchange has had something of a roller coaster existence after it reopened in 1993, a few years after the fall of communism…