Czechs took out record number of loans in 2016

Czechs markedly ran up new debts last year, the daily Hospodářské noviny reported on Tuesday. The overall debt burden in 2016 amounted to nearly two trillion crowns. During the first three months of 2016 alone, Czechs took loans amounting to 150 billion crowns. According to the daily, the demand was driven mainly by applications for mortgages. Photo: Barbora Němcová At the same time, the number of indebted individuals dropped by nearly a tenth, thanks to the positive state of the Czech economy. The only exception was young people between the ages of 15 to 24, who are facing increasing problems with paying off their debts, the daily writes.

In 2016, Czechs took new loans worth a record 549 billion crowns. According to the data by CRIF (the Czech Credit Bureau) which is in charge of the Banking and Non-banking Credit Register, the overall debt burden reached 1.96 trillion crowns, which is an increase by 151 billion crowns on the previous year.

According to data from the non-banking credit register, Czechs mainly took new loans in the first quarter of last year, when the amount of new debts exceeded 150 billion for the first time in history. According to Jiří Rajl, the executive director of the non-banking credit register, people wanted to take advantage of special last minute offers, while they were still available.

Petr Kučera, the executive director of the Czech Credit Bureau, told the daily that he expected the overall volume of debt to increase even more in 2017. At the same time, people will take fewer new loans. “Interest rates are expected to increase and the Czech Central Bank will tighten up conditions for providing them,” he told the daily Hospodářské noviny. 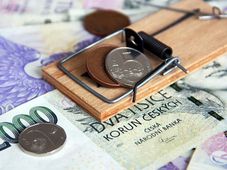