Some 22 million tourists visited the Czech Republic last year, a slight rise in a long-term growth trend, according to preliminary data compiled by the state agency CzechTourism. While foreign visitors are welcome, simply increasing their number each year is no longer the main goal. 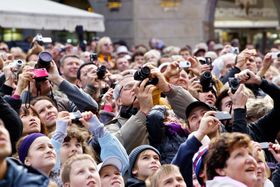 “I think it’s not that there are so many tourists in Prague and the Czech Republic, but in Prague they tend to stick to two or three streets. At the same time, some shared economy platforms in Prague and elsewhere in the country are not regulated,” Herget told ČTK (possibly referencing services like Airbnb).

Speaking ahead of the International Fair for Regional Tourism in Brno, which begins on Thursday and wraps up on Sunday, he noted CzechTourism is cooperating with travel agencies that cater to large groups of Chinese tourists together to explain cultural differences.

He also hinted, according to ČTK, that previous years to attract ever more foreign visitors are over. CzechTourism is looking to create 14 tourism centres across the country and promote the respective regions also in more distant and non-European countries.

The idea is to distribute tourists more evenly – not have them visit only Prague or Český Krumlov, Herget is quoted as saying. “Ideally, there could be a hotspot in every region.”

Germans last year made up around 20 percent of all foreign visitors, according to the Czech Statistical Office (ČSÚ) data, which show a significant jump in the number of French visitors, with their numbers up more than 10 percent in annual terms.

Since last January, the number of tourists from China, the United States and Poland has been increasing, while the number of British, Italian and South Korean visitors fell year-on-year.