The Czech Republic’s auto producers and spare parts makers are currently lacking several thousand workers and expect to face the same problem for the rest of the decade, if not longer. To combat the problem they are advocating for changes in the country’s education system. 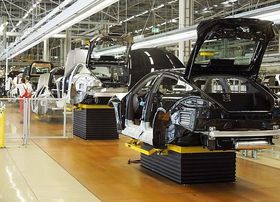 Photo: Klára Stejskalová According to information released on Tuesday by the Automotive Industry Association, the country’s carmakers and spare parts producers are currently unable to fill around 4,000 positions. What’s more, they say the situation is unlikely to improve until 2020 at the earliest.

The association’s spokesman, Miroslav Konvalina, told the Czech News Agency that demand for new workers stood at around 3.5 percent of the total number of 117,000 currently employed by its member companies.

For some time auto makers have advocated for a new dual education system that would help produce the workers that they require by combining classroom theory and hands-on shop floor experience.

On top of this, they back measures to inculcate a relationship with technology in children at a young age. This would include the introduction of polytechnic teaching in pre-schools and the reintroduction of what is called practical education at elementary schools.

At tertiary level, interest in new fields linked to transportation is already on the rise, the Czech News Agency reported.

For instance, the Department of Security Technologies and Engineering at the Faculty of Transportation Sciences at the Czech Technical University in Prague has registered a rise in applications for courses in transport security and the application of information and communications technology in the transport field.

The department’s head, Václav Jirovský, says this upswing in interest has been sparked by the success of the course’s master’s and bachelor’s graduates in the local industry.

Among other things, Mr. Jirovský’s students study issues surrounding the sharing of information between vehicles, connections to mobile networks, developments in the hacking of transport systems and sensory systems in transport networks.

The connectivity of cars will lead to the broad sharing of vehicle diagnostics in real time, says the academic. But this also poses a significant security risk, including threats to human life in the event of an attack or system failure in vehicles, he adds.

A record 1.34 million cars were produced in the Czech Republic last year. Local mainstay Škoda Auto remains the largest producer, and the country’s single biggest exporter, while companies such as Hyundai and TPCA are also major players.

Automakers and parts manufacturers account for more than one-fifth of total Czech industrial production and the Automotive Industry Association’s members recorded sales of over CZK 900 billion in 2015.