Grain harvest down by eight percent this year

According the Czech Statistical Office’s estimate, this year’s grain harvest is 7.9 percent lower than that of the previous year. While the yield of several major crops including potatoes, peas and sugar beet has gone down, harvested rapeseed has increased by over 20 percent in comparison to last year. 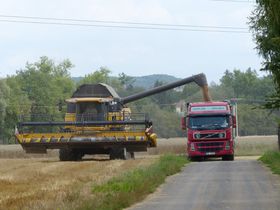 Photo: Klára Stejskalová Potatoes have seen one of the worst harvests in the Czech Republic in monitoring history, with yields of around 557,000 tons. Czech Radio reports that only in 2013 and 2015 was the amount lower, although the planted area has slightly decreased to almost 23,000 hectares.

The decrease in cereal production was mainly caused by lower yield per hectare, which went down by 6.7 percent to 5.15 tons per hectare. According to the current estimate, the cereal yield is 15.2 percent lower than the past five-year average, the Czech Statistical Office told Czech Radio.

Corn yields have gone down by a fifth, while wheat and barley fell by 7.3 and 8.2 percent respectively. Not all cereals have seen a decrease; rye yields are up by 13 percent and oats by nearly six.

Statisticians told Czech Radio they expect sugar beet yields to be lower this year, after the sowing area slightly decreased to 65,000 hectares and a reduction in yields of 23 percent to 51.04 tonnes per hectare.

The yields of one of the most popular ingredients in Czech baking, poppy seed, has gone down by nearly a third.

However, not all agricultural products have fared badly in 2018. Rapeseed harvests should be up by 2.6 percent in comparison to the five-year average. The expected increase is a result of crop yields going up by 15.5 percent per hectare. Furthermore, the sowing area was expanded by 4.4 percent to 41,000 hectares.

Lukáš Kovanda, the main economist of Czech Fund, told the Czech News Agency that the country’s consumers are likely to start feeling the low harvest in their wallets around the turn of the year and that the increase in prices is likely to be affected also by the increase in energy costs as well as the dry summer.