The proposed incoming minister of energy and trade has outlined his priorities. These include energy, ‘smart’ households, dealing with the country’s industrial waste legacy, fast internet and telecom charges. 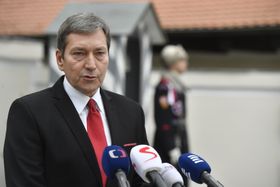 Tomáš Hüner, photo: CTK Tomáš Hüner is one of the handful of experts who prime minister Andrej Babiš has proposed for his new Cabinet. And as such he was subject to a fairly short consultation with head of state, president Miloš Zeman. The talks lasted for a little over an hour.

In all honesty, Hüner is hardly a newcomer to the ministry nor to most of the topics it handles. He has worked in the energy sector for most of his life and was for five years, between 2006-2011 a deputy minister in charge of energy and industry policy.

After heading one of the country’s biggest regional electricity distributors, clashing with state-dominated ČEZ, he later went to work for the power giant heading up its Bulgarian operations. Latterly, he has been a manager at the Czech branch of worldwide technology, engineering, and IT giant Siemens.

And that broad background was reflected in the priorities which Hüner outlined after the talks at the president’s country retreat. One of these is fulfilling the Czech Republic’s energy policy aimed at boosting the role of nuclear power in the country while at the same time ensuring a broad energy mix and export surplus in electricity. One branch of that policy is the increasingly pressing need to push ahead with moves to agree a site for a deep storage site for high level nuclear waste. This is what he said shortly after the meeting:

"There is a need to really actively work on the site for deep storage of nuclear waste and prepare the localities for construction so that by 2025 building permits can be given for such a facility."

Preliminary examination of around half a dozen sites has met with vociferous opposition from local mayors and citizens.

Hüner also touched on the question of exploiting the country’s raw materials, including lithium, a high profile issue in October’s parliamentary elections. But said he would not expand on this until he got to grips with the dossier.

The proposed incoming minister also stressed the importance of digitalizing industry. But also suggested that should be broadened out and touch on so-called ‘smart households’ using fast Internet connections. And Hüner also brought up the hot issue of telephone company charges for mobile data transfer, warning that he would seek talks with the big providers.

He warned he would seek to end the duplication of services by the state inward investment promotor, CzezchInvest, and the exports agency, CzechTrade. Both come under the industry and trade ministry.

Hüner, along with the rest of the incoming Cabinet of ANO leader Andrej Babiš, should be confirmed in their new posts on Wednesday.