The Supreme Audit Office has uncovered inaccuracies amounting to over CZK 100 billion in the accounts of the Ministry of Finance for 2015. Officials say that shortcomings in the ministry’s accounts could impact the state’s final account and financial statements – and that the ministry even mixed up billions and millions. 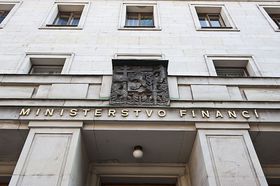 Ministry of Finance, photo: Filip Jandourek The Supreme Audit Office made the announcement on Monday that its inspectors had uncovered inaccuracies in the Ministry of Finance’s accounts for the year before last. The figure involved was eye-catching to say the least: over CZK 100 billion crowns.

Václav Kešner is the spokesman for the Supreme Audit Office:

“For instance, there were inaccuracies in off-balance-sheet accounts amounting to over CZK 31 billion. There were inaccuracies of CZK 108 billion in other parts of the appendix. In concrete terms, this mainly concerned errors in the provisions of guarantees. For instance, the Ministry of Finance should have reported CZK 83 billion – but by mistake it reported only CZK 83 million.”

In another case, a guarantee was issued for more than CZK 19 billion crowns in a manner that made it unclear whether the state had indeed provided such a guarantee.

Inspectors discovered that the Ministry of Finance did not create any book reserves or reduce the value of some assets. This distorted data on its assets and de facto liabilities to the tune of tens of millions of crowns.

Moreover, this situation arose despite the fact that an overhaul of accounting regulations introduced in 2010 requires the Ministry of Finance to carry out such steps.

If the ministry does not rectify the shortcomings the inaccuracies will influence the drafting of the country’s financial statements, the Supreme Audit Office said.

The inspectors also uncovered deficiencies at the system level, saying the reporting of some government debt data did not have clear rules, which may lead to different valuations and reporting.

“We would like to point out that this definitely this is not a case of genuine non-accounting. It is a case of inexact classification in the framework of similar accounts. The overall amount of accounted liabilities has not been influenced in any way. This accounting, like potential re-accounting, has not had and will not have an influence on any indicators relating to the state’s finances. It will only be visible in a change in the accounting structure of liabilities.”

The Ministry of Finance also says the situation has changed since last year thanks to public finance reforms.