Following a pause brought about by the arrival of the coronavirus epidemic, the company Lime is reintroducing its distinctive green, black and white electric scooters to the streets of Prague. The Czech capital is one of the first cities where Lime’s operators are resuming services. 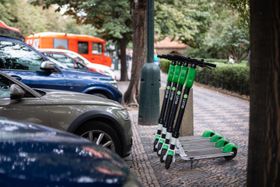 Photo: archive of Lime Lime, which started out in the United States in 2017, normally has around 1,500 of its vehicles on the streets of Prague. However, it removed them here and in more than 20 other cities around the world in mid-March in view of the coronavirus epidemic.

For now it has brought 200 back to Prague, the operating manager of its Czech operations, Ondřej Široký, told the Czech News Agency.

Mr. Široký says the return of the rest will depend on the behaviour of users, adding that the company will thoroughly clean and disinfect its machines. They will reappear in other metropolises after Prague, he said.

The Prague 1 authorities recently passed a ban on electric scooters in pedestrian zones on and around the city’s historic Old Town Square. However, it has not yet erected the relevant signs, meaning the prohibition has not entered force.

Councillor Richard Bureš told the Czech News Agency that the introduction of the ban would depend on the return of tourists to the downtown area.

Lime and Prague authorities have had a bumpy relationship, with the company criticising Prague 1, city councillors and Prague 2.

There was a memorandum on cooperation between Prague City Hall and Lime but the former abrogated it some time back.

However, Mr. Široký says that talks are now underway to try to revive an agreement between the two parties.

The Lime representative said it had offered the city payment for the use of public spaces. It also plans zones with speed limits for Lime riders in the most crowded parts of the city centre.

Lime scooters first appeared in the Czech capital at the end of 2018. Critics complain about them being ridden on pavements and parked willy-nilly.

The firm says they represent a green form of transport but local authorities point out that they are primarily used by tourists.

Similar criticisms have been levelled at Segways, before they were eventually banned by City Hall, and other forms of electric bikes.

Lime is not the only such service in Prague, which also has Revolt electric scooters, Rekola pushbikes, Car4way shared cars and Homeport electric bikes. 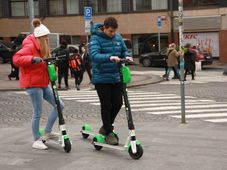