Pivovary Lobkowicz, parent company to a number of Czech beer brewers including Platan, Lobkowicz and Černá Hora, has become the first such company to join the Prague Stock Exchange. 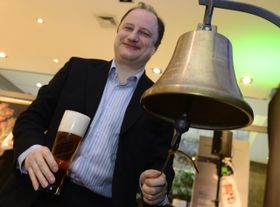 Zdeněk Radil, photo: CTK On Wednesday, shares in Pivovary Lobkowicz, the fifth biggest brewer in the Czech Republic, officially began to be traded at the Prague bourse. The starting price was 160 crowns per share, but strong demand soon saw this price increase to as much as 163 crowns throughout the first day. The almost two-percent price increase countered market analyst expectations of less than stellar interest in the brewer’s shares. Indeed, according to Lobkowicz Chairman Zdeněk Radil, investor interest proved so strong that demand for the 2.5 million shares outstripped supply. According to reports, investors from countries including Austria, Poland, Hungary and Slovakia, flocked to purchase the shares.

Zdeněk Radil also added that the revenue gained from the share sale will be used to invest in further expansion and development, particularly in terms of enabling restaurants and bars to sell its products on tap. According to Czech Television, the company is also seeking to increase its international presence, particularly in Russia and the countries of the former Soviet Union. Overall, the company says it has raised more than 400 million from the share offering. 200 million crowns will be invested for expansion, with another 100 million used to acquire an unspecified Czech brewery later this year. However, on Thursday the daily Lidové Noviny reported that the target brewery in question was the Olomouc-based Měšťanský Pivovar, and that this deal had fallen through. Perhaps partly due to this negative news, shares in Lobkowicz were trading down 0.8 percent on Thursday.

Lobkowicz is very likely to remain the largest and only Czech brewery on the Czech Stock Exchange for some time. Its larger rivals, such as Plzeňský Prazdroj or Staropramen, are under foreign ownership, while Budějovický Budvar, locked in endless litigation with US firm Budweiser, remains under state control. “Many traditional investors have been asking me why the Prague bourse does not trade in such a traditional Czech product as beer,” Lobkowicz CEO Petr Koblice told ČTK recently. “Now we finally have an answer.”

Overall, Pivovary Lobkowicz’s market capitalisation is estimated to be worth 1.87 billion crowns. Last year, the company’s revenue increased to around 1.2 billion crowns. For the Prague Stock Exchange, this is the first initial public offering (IPO) from a company in three years. It represents only the ninth ever Czech company to make an IPO.