The Czech Railway Infrastructure Administration (SŽDC) is planning a massive reconstruction of Masarykovo nádraží, Prague’s oldest functioning railway station, the daily e15 reported on Tuesday. The cost of the renovation, which is likely to get underway in 2022, is estimated at two billion crowns. 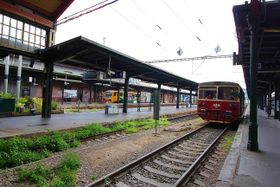 Masarykovo nádraží, photo: Sophie Eberhardt Masarykovo nádraží, which is just five minutes’ walk from Prague’s main railway station, was built in 1854. The station underwent its last major reconstruction in the 1930s and has been in bad need of repair for years.

The project of a new railway yard and roof construction was designed by the engineering company Sudop Praha and the architectural studio Jakub Cigler Architekti.

“The reconstruction means a complex modernization of the station. It includes enlarging the number of railways from seven to nine, building a new hallway that would connect the streets of Na Florenci, Hybernská and Opletalova with accesses to individual platforms,” Marek Illiaš from SŽDC’s press department told e15.

The stopping distance, e.g. the distance the trains need to come to a full stop, will be extended to one kilometre along the whole perimeter of the station. The project will also include modernizing a stretch of railroad track in the district of Libeň.

The district in the vicinity of the Masaryk Station is also set to undergo major changes in the near future. The Czech-Slovak investment group Penta plans to build a state-of-the-art business district there, including administrative buildings, shops and restaurants and a park designed by the late world-renowned British architect Zaha Hadid.

Penta acquired 15,000 square metres of land in the vicinity of the station from the SŽDC in 2016 for 235 million crowns.

The Czech state railways administration has been quietly developing a new, uniform audio announcement system that will do away with…