The Czech Republic’s state budget should end the year with a small deficit if European Union subsidies are not counted, according to the minister of finance. If EU funds are included, he predicts a surplus of several billion crowns. 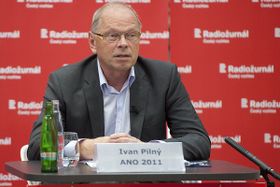 Ivan Pilný, photo: Filip Jandourek Speaking on a Czech Television debate show on Sunday, the ANO-appointed Czech minister of finance, Ivan Pilný, said the final tally as regards this year’s central state budget would depend on what measuring stick were employed.

“With regard to the deficit issue, it depends on whether we calculate it to include European Union money and financial mechanism, or not. The great result achieved at the close of last year was caused by a big finish as regards drawing on EU funds – that’s why there was a surplus. However, if we discount that factor, you can see that this year’s results have been better. That’s because the drawing of EU funds this year has been slow, I would almost say disquieting, and this is reflected in the complex deficit figure.”

Minister Pilný then gave his assessment of how things are likely to look once the dust has settled on 2017.

“If we don’t count European Union funding, which will be drawn upon at a faster rate as we get nearer the end of the year, my estimate is that… and it is an estimate, because we have to be aware of many factors, such as the fact that we raised the salaries of all state employees from November 1, and that has to impact the state budget in some way… my estimate, if we don’t count European funding, is that we should finish with a mild deficit, of, for instance, CZK 10 billion. If we do count European funding, we could have a mild surplus.”

Earlier in November Ministry of Finance data showed that the budget surplus had climbed to a yearly high the previous month. However, it had still fallen from the same period in 2016 because of the referred to falloff in EU subsidies.

The surplus stood at CZK 26.5 billion with two months of this year remaining, meaning that the year is extremely likely to conclude with a deficit below the set target of CZK 60 billion.

A year ago the Czech government recorded a CZK 98.3 billion surplus, boosted by EU funds. That inflow of cash reached a peak last year and was CZK 79.5 billion higher than the figure seen in 2017 to date.