The all-new Škoda Fabia supermini made its world debut at the Paris Motor Show on Thursday. The latest Fabia model offers a younger, sportier look, a spacier interior, new steering and suspension technology, engines shared with the current Volkswagen Polo and a number of safety and communication elements that have so far been available only in higher-class cars. 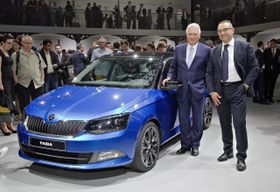 Winfried Vahland, Luboš Vlček, photo: CTK “Škoda Auto is known for its high functionality and space. Now, we have combined those features with an expressive, emotive design. We are once again setting standards in the small car segment ” the head of Skoda Auto Winfried Vahland told reports in Paris as he unveiled the long-awaited model. The metal blue mini on the catwalk which aims to rival the Ford Fiesta is more dynamic and sportier than its predecessor with balanced proportions, crystalline forms and sharp lines. Lower and wider than the model it replaces, it offers more space in the cabin, a larger boot (300 litres in size) and distinctive headlights to create a more imposing front end.

The new Fabia, which will be available in 15 colours, is the first Škoda ever to feature Mirror Link and Smart Gate technology, connecting the smartphone to the vehicle. It also sports a better safety kit, adding automatic emergency braking that can stop the car if it senses an impending collision, plus a rear-view camera, driver activity assist and hill-hold assist systems.

The supermini comes with new 1.0-litre petrol or 1.4-litre diesel engines (shared with the current Volkswagen Polo) which will help the new model achieve gains of up to 17% in economy and a six-speed manual or a seven-speed dual-clutch automatic. 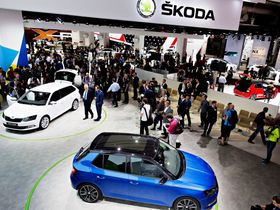 Škoda Fabia, photo: CTK The basic price of the third generation Fabia model will start at 234,900, the same as the starting price of its predecessor, the hatchback which is now in the process of winding up production. Dealers will start accepting orders for the new mini on Friday and the car will be delivered to the first customers in the middle of November, according to Luboš Vlček, head of Skoda sales in the Czech Republic.

The older Škoda Fabia models can no longer be ordered though they can be bought at up to 15,000 crowns cheaper within special discount offers at outlets around the country.

The Fabia is Škoda Auto’s second best-selling model after the Octavia. The company has sold more than 3.5 million Fabias since 1999, of which 450,000 were sold in the Czech Republic.