Car maker Škoda Auto has received over 1,600 orders for its new crossover named Kamiq even before the start of sales at the beginning of September, according to company head Luboš Vlček. With its third SUV and first urban crossover, Škoda will be in competition with Dacia Duster, Peugeot 2008 or Renault Captur. 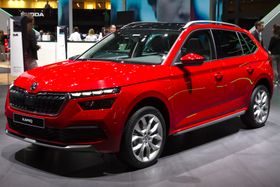 The automobile plant in Mladá Boleslav invested approximately EUR 100 million, i.e. more than CZK 2.5 billion, in the production of the Kamiq model. Kamiq is the third SUV brand in the European market alongside the Kodiaq and Karoq and combines the advantages of SUVs such as higher ground clearance or increased seating with the agility of a compact car. Kamiq will be available in a gasoline or diesel version from the start and will be powered by G-TEC in Q4. The price of the car on the Czech market is at around 400,000 crowns.

This year, Škoda wants to introduce the electric version of the Citigo and is working on the fourth generation of the Octavia, which will be available next year. In 2020, the Octavia will also feature a plug-in hybrid and another small SUV electric car.

According to Vlček, Skoda is preparing for electro-mobility, it has trained 10,000 people, including 1,000 experts. All dealers of the brand will be able to sell and service electric cars.