A large part of cigar smoking Czech multi-billionaire Zdeněk Bakala’s fortune could go up in smoke. 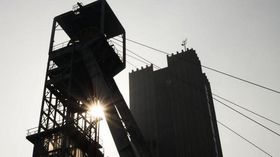 Photo: OKD That at least is one scenario in play with the current management of hard coal mining company OKD mulling whether to widen legal moves seeking payment from Bakala and his mining company New World Resources from 24.5 billion crowns (around 900 million euros) to 64.5 billion crowns. OKD confirmed the facts to Czech Radio.

The initial legal steps focused on 24.5 billion crowns were already at Ostrava’s regional court last week. The basic argument for the court is that Bakala stripped or tunneled the Czech Republic’s biggest hard coal mining company, taking out in dividends and raiding the reserves between 2006 and 2012 in amounts that far exceeded the modest profits being turned in and exceeded normal corporate good governance. The difference between the 24.5 billion and 64.5 billion crown figures depends on what level of corporate mining what involved.

Bakala’s personal fortune was in 2016 reckoned at around 1.9 billion US dollars (around 48 billion crowns). He owns the Czech Republic’s main business newspaper and still has a wide range of real estate and industrial investments.

Away from Bakala’s own fortunes, those of the OKD mining group still look uncertain. A court cleared the way in August for management to prepare a restructuring plan that would avoid bankruptcy and the piecemeal sale of assets. But it is still not clear whether the restructuring plan will be ready by the original target date of December 12 or whether an extension of 120 days will be requested, pushing back the date to April 12, 2017. That was one of the subjects raised by Minister of Industry and Trade, Jan Mládek, this week as he tried to pin down the company and regional authorities whether they will be seeking more aid from the government.

There are some signs that the restructuring plan could take longer than expected. OKD management have started scouring around for a strategic investor who will be willing to help the mining company keep going, the longest life extension for operations is seen as to around 2023. But they are not expecting any feedback from their approaches until the end of this year or the start of 2017.

One thing though is already pretty clear already, a restructured OKD will not include the Paskov mine. It is set to close at the end of 2016. Five hundred miners and two hundred technical staff are set to lose their jobs.

For the mines that could survive, there has been some positive news over the last few months. Hard coal prices have actually bounced back since the start of the year, actually doubling to around 157 US dollars a tonne by mid-Septmber. There are some special factors involved in the supply squeeze that has helped push up prices, such as reduced domestic mining in China and interrupted production in Australia, but the overall trend is clear. Whether that will suffice to save OKD or attract a white knigh savior is another question.