Observers may have been surprised when they saw a Mercedes mini-van drive into the Vltava river a few miles outside Prague. A GPS gone wrong? A suicide attempt? Or a not very ecological driver trying to dump the van and cover up his tracks? 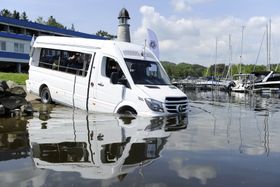 Enjoy Sprinter, photo: CTK No, none of the above. In fact what onlookers were witnessing was a demonstration of a prototype amphibian minivan with its backers, the Prague subsidiary of British-based company Enjoy Tech Limited, looking to step up production at a site outside the Czech capital.

Enjoy Tech say they are already able to produce around five of these amphibian minivans a year but it’s looking to expand that total. The company says there is already demand from the United Arab Emirates (UAE), where strong links have already been established, as well as Russia and China.

The market being targeted is recreation as well as for emergency services. Flash floods are common in many parts of the world or the vehicle’s dual use capabilities could simply be used to getting to emergencies quicker.

The minivan, capable of carrying 12 including the driver, can be turned from a land based vehicle to water one at the flick of a switch. The steering wheel is for direction on both land and water-based modes. 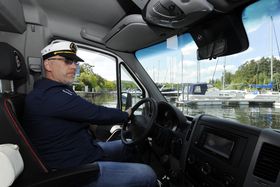 Enjoy Sprinter, photo: CTK The model is based on a normal Mercedes Sprinter van that is adapted to operate on water and according to the buyer’s specifications. The driver and passenger cabins and strategic parts of the van are evidently watertight with the van’s stability modified for waterborne operation and software used to help with its operation. The reinforced plastic body has several layers and there is an emergency pumping system in case of an accident on water.

Amphibian vehicles are not a totally new idea. One such vehicle features in the John Le Carré novel ‘A Small Town In Germany.’ The episode was not total fiction but apparently based on the author’s fathers attempts to promote the sales of such a van in the late 1960s and early 1970s. Apparently, the real world sales of the amphibian vehicle were disappointing as its manoeuvrability and water tightness were not totally convincing with the attempt added to Le Carré senior's (Cornwell’s) series of con tricks that did not pay off.