Viewing the sights of Prague from a beer bike with a cold lager in hand and fifteen friends around you may seem like the perfect tour of the city, but “partying while you pedal” may soon be a thing of the past. Following the example of cities like Amsterdam, Prague City Hall wants ban to beer bikes from the historic city center and, if possible, other areas as well. 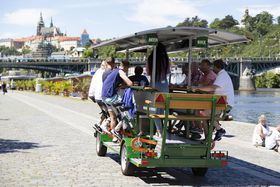 Photo: archive of Prague Municipal Police Ever since tourists started flooding to Prague after the fall of communism almost 30 years ago, small-scale entrepreneurs have been falling over themselves to offer something foreign visitors would snap up. Over the years the locals watched bemused as tourists bought kitschy matrioshkas which have nothing to do with Czech culture in Celetná street, took photos with giant furry bears or clowns on Old Town Square and rode around the city on rickshaws, Segways, beer bikes and electric scooters, often putting pedestrians at risk. At one point tourists were taking pictures with a python around their neck –for 200 crowns each – in the city center – before the police intervened.

Prague City Hall has been fighting this trend with mixed success. Following numerous protests from the public, it issued a ban on Segways at the end of 2016 and now – under growing pressure from Prague 1 –it wants to introduce a ban on beer bikes in the city center and if possible other areas as well.

In the past Prague 1 fought a lonely battle to try to restrict the number of beer bikes in the historic center by handing out fines based on the fact that drinking alcohol out in the open is prohibited in the area.

“Alco-tourism” is not something we want to promote in Prague, Prague 1 Mayor Pavel Čižinský argues.

Now Prague 1 has support from Prague City Hall and it has also responded positively to a proposal to deal with “visual smog” as Prague 1 calls the various Disneyland characters wandering around Old Town Square. Prague Councilor for Culture Helena Třeštíková said on Tuesday that City Hall is preparing a directive which would curb these commercial attractions in the center of Prague.