Czech economic growth in 2018 slowed to 3 percent, down from 4.5 the previous year, according to data released by the Czech Statistics Office. While confidence in the economy is still high, in terms of economic growth, the Czech Republic is lagging behind the other Visegrad Group states. 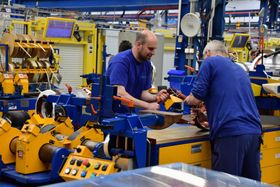 Illustrative photo: Michal Polášek / Czech Radio The Visegrad Group states –comprising the Czech Republic, Slovakia, Hungary and Poland, have prided themselves on being the driving force of economic growth in Europe. One of the V4 states dubbed “the Eastern tigers ” is now falling behind. In 2018 the Czech Republic saw 3 percent growth, as compared to Poland’s 5.1 percent, Hungary’s 4.9 percent or Slovakia’s 4.1 percent, which they all maintained towards the end of the year.

While Czech growth is driven by private consumption, investments, industry and trade, what is holding the country back is a lack of workers. The country hit its production potential ceiling sooner than the other V4 member states. While all four countries have a record low unemployment Czech firms have by far the biggest problems finding workers.

Another reason why the Czech Republic has seen slower growth is - according to economic expert Miroslav Novak cited by Novinky.cz - a very mild expansionary economic policy compared to the other V4 countries. Novak points out that the Czech Republic was the only country in the Central European region to tighten its monetary policy last year by raising interest rates.

Another factor involved is that the Czech Republic is a pro-export economy and the country’s biggest trade partner, Germany, is balancing on the brink of recession.

The Czech government’s efforts to bring in more foreign workers –particularly from Ukraine – in order to ease the situation on the job market and its economic diplomacy aimed at finding new markets for Czech producers outside of the EU are seen as a move in the right direction, but not expected to produce results fast.