The Czech Republic has been among the EU’s top budget performers, running overall fiscal surpluses in the past two years on the back of an economic boom and a fall in unemployment to under 3 per cent – the lowest level in the bloc. So why is the government now looking to run deficits at a time of slowing growth? While that means scaling back the proposed central state budget by 20 per cent, it still counts on among the biggest spending rises in the Czech Republic’s modern history. And it will tie future budgets to generous spending commitments that could push up deficits when economic growth, already slowing, inevitably takes a sharper downturn.

When Schillerová’s boss and predecessor, Prime Minister Andrej Babiš, headed the ministry, he was lauded for balancing budgets – the first in two decades. But his populist Ano movement won the October election in part on promises of higher state salaries and pensions and boosting spending on healthcare and infrastructure. Schillerová said in a debate programme on Czech Television that rising tax revenues would make up the 10 billion crown difference.

“We recalculated the revenue. Logically, there is pressure on wages along with economic growth. Wages are rising throughout the economy, and because taxes and social charges account for over 50 per cent of government revenue, there is more for the budget. And I decided – and I am telling you here, exclusively, for the first time – that when I submit the budget as required by the end of August, I will submit a draft central state budget deficit of 40 billion crowns.” 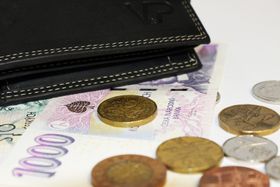 Photo: Pixabay CC0 Former central banker Eva Zamrazilová, head of the country’s new National Budget Council appointed by parliament, is among those who fear the Babiš government spending spree could undo the gains of from the belt-tightening he pushed through as finance minister. And this when a big part of revenues, EU subsidies, will also shrink.

“All ministers have their hands constantly full with many, many priorities – which, of course, all sound quite reasonable. Of course, monuments must be repaired. Nurses are paid too little. Teachers are paid too little. Who would not agree with this? Retirees are not living well. These are all very legitimate requests from the social point of view. But the Finance Ministry’s task is also legitimate: to balance these extreme demands while ensuring there is money left over for the year and even in the future.”