Public institutions failing in their duty to employ people with disabilities

According to a report presented to the cabinet by the minister for human rights and equal opportunities, Jiří Dienstbier, Czech public administration is failing in its duty to employ a set number of people with disabilities or support their employment indirectly by purchasing goods or services from firms that employ them. According to the report not a single Czech ministry fulfilled the set 4 percent quota, paying almost 16 million crowns in fines for the failure. 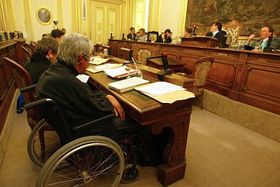 Photo: European Commission According to Czech law every firm with over 25 employees must offer employment to people with disabilities. The set quota is four percent of the company’s employees. Those who fail to meet the criteria can still make up for the failing by purchasing goods or services from companies that employ predominantly people with disabilities –either that, or they pay a steep fine for breaking the law.

Public institutions are expected to set a good example in this respect, but the figures show that they are doing an extremely poor job. In 2014 not a single Czech ministry employed the set number of people with disabilities and many of them completely gave up the proffered alternative – instead paying high fines to the state. While in 2007 ministries paid the state 1.1 million crowns in fines for failing to meet the set quota last year it was 15.7 million crowns.

In total 407 people with physical disabilities worked at ministries and state institutions in 2014, while the required number would have been 946. The ministry that came closest to meeting the set quota was the Ministry of Labour and Social Affairs which employed 37 disabled people and bought items made by disabled people to make up for the five remaining job positions. The ministries of culture, trade, justice and health also cooperated with firms that employ disabled people while the rest simply paid fines. The Anti-Trust Office and the Energy Regulatory Office did not employ a single disabled person and the highest fine –amounting to 1.2 million crowns – was paid by the Czech Telecommunications Office.

Ministries have offered a variety of explanations for their failure to comply with the law – the Environment Ministry says it don’t have enough applicants with disabilities to fill the set number of positions, the Interior Ministry says it lacks barrier free work places while the Foreign Affairs Ministry says it cannot meet the norm because of the required rotation of employees in different posts and the need for many of them to travel.

The present state of affairs has come under fire from the National Council for People with Disabilities which argues that public institutions are setting an unfortunate precedent in failing to comply with the law, because if they refuse to do so, why would private companies bother? Krkonoše is home to the highest mountains in the Czech Republic, with majestic peaks protruding above the alpine tree line and a unique… 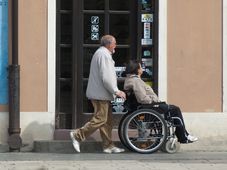 Dating agency head: we focus on the life you want, not the one you have

Jakub Mertl and his wife Kristyna who run a successful personalized dating agency, recently made headlines by establishing an online…

The Czech Republic is introducing sexual assistants trained to provide paid services to disabled people. The assistants, whose services…