The Czech agency for attracting foreign firms has been told to get back to basics and attract incoming investment and domestic expansion. But looming changes in key EU regional aid rules will put a brake on a rapid turnaround in CzechInvest’s performance. Photo: archive of CzechInvest Czech Minister of Industry and Trade Jan Mládek changed the guard as expected at the main Czech agency aimed at encouraging inward investment and expansion by firms already on the ground, CzechInvest.

Head of the investments division Ondřej Votruba, whose CV includes spells as head of the Prague branch of Japanese state agency for investment and trade JETRO and CzechInvest’s director in Japan, and takes over as caretaker manager. A tender will be held for a long-term director with Votruba, who speaks fluent Japanese, German and English, declaring Thursday that he hopes to throw his hat into the ring.

Mládek explained that he is seeking a new Martin Jahn, the almost legendary director of CzechInvest in its heyday. Jahn left the agency to become economy minister in the Social Democrat dominated government from 2004 to 2005 before joining Czech car maker Škoda Auto and then parent company, Volkswagen. CzechInvest had, the minister added, become too detached from its core tasks and instead almost become a parallel industry and trade ministry. Business to business should now be its main target. Mládek admitted though that times have changed since the Jahn era and the really big greenfield investments of that era are no longer up for grabs.

Votruba has moved fast to push through some changes at the agency, cutting the numbers of its top management to 10, and suggesting some of the procedural paperwork and practices should be simplified and relaxed. In addition, Mládek’s interventionist style in his early days as minister, for example in seeking to make sure that Amazon sites two new distribution centres in the Czech Republic, are described as having a motivational impact on the agency.

But it would be premature to expect a fast turnaround in CzechInvest’s performance. One fundamental problem overshadowing both the agency and industry ministry in the coming months is a proposed shake-up of European regional aid rules which are likely to make it harder for the Czech Republic to compete against its regional counterparts for inward investment. Consultations are still taking place about the final shape of the new rules with Prague seeking some changes to come improve the final outcome.

The European Commission is basically seeking to push through a new set of regional aid rules which should guarantee that help is really focused on poorer regions and that relatively richer states do not use the aid to ‘trump’ poorer ones. It also wants to try and ensure that incentives are just that and not windfall gains for companies that would have invested in any case.

In particular, the new rules, which should come into effect in July, should demand that detailed justification is made for aid to large protects and proof given that the investment would not have taken place without it. All investments of more than 100 million euros will have to be notified to the Commission and provide this sort of proof.

The Czech Republic is likely to lose out against poorer regions in Central European countries, such as Slovakia, Poland, and Hungary, in terms of the maximum aid that can be offered to cover investment costs. For the largest firms, the proportion of so called eligible investment costs that can be covered by aid is set to fall from 40% to 25%. 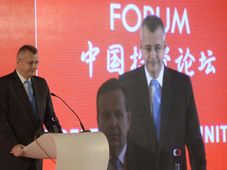 This Monday saw the start of the China Investment Forum in Prague, billed as a key platform for building future business ties. Organisers,…