Transparency has not perhaps been one of the biggest features of the Czech health system, according to its critics. But the government says that a revolution in the hitherto rather opaque relationship between the main paymasters of the system – health insurance companies – and the hospitals, doctors, and others providing services to patients is now underway. 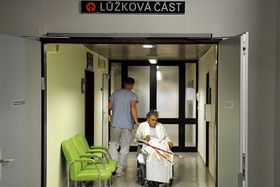 Photo: Filip Jandourek Government says ‘revolution’ to take place in health care sector The government says a proposed new law should clamp down on the potential for corruption in the health sector and should result in better value for money for patients and a clearer picture of how their contributions are being used.

The government at its first meeting this year on January 7 pushed through a proposed law that it says will shed a lot more light on the financial flows and dealings between insurers and health providers and, eventually, result in better value for money. Health insurers had a turnover of around 222 billion crowns in 2013 but figures already released suggest that the differences insurance companies are paying to hospitals for the same type of operations or services could be up to a third or even more.

The main demand from the new measure is that health insurers will have to make public, on the Internet and elsewhere, all the agreements that are passed between themselves and providers. Details must be furnished within 60 days of the deals being agreed with the top penalty for failing to do so amounting to 10 million crowns.

The proposal should also ban health insurers from hiring marketing and other companies to garner more clients on their behalf. The government was worried that health insurers have in recent years been spending increased sums on boosting their client numbers rather than covering the costs of basic health services and sharp practices appear to have been used by some of companies encouraging clients to switch from one health insurer to another. Health insurers which fail to fall in line could be fined up to 5 million crowns.

And finally, stricter rules will be introduced aimed at general managers of health insurance companies or members of their main governing bodies from being faced with potential conflicts of interest. For example, general managers and bosses of health insurance companies will not be able to have top posts in more than one such company at a time and will be banned from holding any position whatsoever in drug companies or companies providing health services.

The move will also shake up the existing rules on the flow of information between health insurance companies and the ministries of finance and of health and cut the financial reserves the insurers are obliged to maintain. In fact, the mandatory reserve will be halved.

But the proposed new measure has not been universally welcomed by everyone in the health sector. Some doctors have warned that opening up all agreements to public scrutiny will create envy and foster the impression among some parts of the population that they are profiting from the system.