Ruling parties at odds over draft budget for 2020

The parties of the coalition government are at odds over the draft budget for 2020. The Social Democrats, the junior partner in the ruling coalition, have demanded an additional 20 billion crowns for their ministries. Prime Minister Andrej Babiš on Wednesday ridiculed the demand, saying the Social Democrats have spending in their genes. 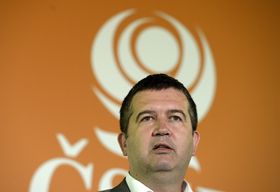 Jan Hamáček, photo: ČTK/Kateřina Šulová Social Democrat leader Jan Hamáček made the party’s financial demands known at a press conference in Prague on Wednesday, saying that, under the current budget proposal, the government and thereby the Social Democrats would be unable to fulfill their promises to voters.

Mr. Hamáček said that in its present form the draft proposal was unrealistic and his party’s ministries alone would fall short of 20 billion crowns. He asked for another six billion for the Interior Ministry, an additional eleven billion crowns for the Ministry of Labour and Social Affairs, and one and a half billion each for the Ministry of Foreign Affairs and Ministry of Agriculture. The money is needed for security, social services, consular services abroad, the fight against drought and moving ahead with digitalization, among others. The Culture Ministry should also get more money for the preservation of the country’s cultural monuments, Hamáček said.

While the Social Democrats are not in favour of exceeding the proposed 40 billion crown budget deficit they would like to see the government increase revenues – through steps such as a bank tax.

Finance Minister Alena Schillerová called their demands “unrealistic” telling journalists she could not imagine how the coalition parties could continue to work together if they could not agree on the draft budget.

Negotiations are expected to continue throughout the summer. The draft budget proposal needs to be approved by the government and sent to Parliament by the end of September after which the battle over public expenditures will continue in the lower house.