The largest daily deal/bulk discount website on the Czech market, slevomat.cz, has been bought by British firm Secret Escapes. 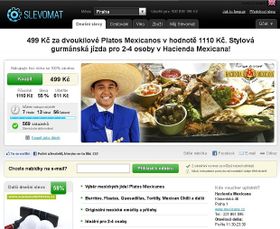 The largest daily deal/bulk discount website on the Czech market, slevomat, has been bought by British firm Secret Escapes. The owners until now, Miton, Enern and In-Bridge, sold the site together with the Slovak equivalent, Zlavomat, and the Slovak lowest-price search aggregator, Skrz.cz, Forbes.cz reported.

The monthly described Secret Escapes as one of the world’s top online sellers of luxury holidays. The group was founded in Great Britain in 2011 and has since spread to a total of 21 markets across Europe, North America and Asia. According to Forbes, the company has been back by numerous key investors, including Google Ventures. Secret Escapes also runs the website travelist.cz.

Slevomat.cz was founded in the Czech Republic in 2010 by Tomáš Čupr; investors Miton and Enern and In-Bridge joined a year later. Miton held a majority stake of 55.5 percent.

Tomáš Matějček, a founding partner in Miton, said in a press release concerning the deal,that the success of slevomat.cz was largely thanks to a team led by Marie Chytilová. He described the company as having been well-managed financially, with a strong place on the market which had attracted significant interest.