As of this week, six metro stations in Prague have a free Wi-Fi connection allowing passengers to surf the Internet while waiting for their train, the Prague Public Transport Company announced on Tuesday. 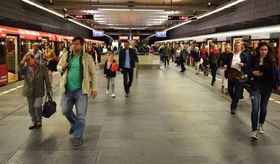 Photo: Ondřej Tomšů The stations are Florenc B and C, Hlavní nádraží, Pražského Povstání, Náměstí Republiky and Smíchovské nádraží. The technology for the project was provided by the company ČD-Telematik for 10 million crowns.

The company had to build the complete infrastructure, installing some 75 transmitters in the stations with the transfer rate of 300Mbit per second.

According to ČD Telematiks board chairman Martin Řezníček, the system was built according to the latest standards, to allow passengers quick access to the network.

The project, which is in pilot operation, was announced by the Prague Public Transport Company in September. After assessing the results, the company will decide whether to extend the service to other stations.

“Passengers who connect to the Wi-Fi network will get online traffic information on Prague’s public transport in their smart phones. In the event of emergencies, it will allow the company to immediately inform passengers about substitute connections or safety instructions,” general director of the Prague Public Transport Company, Martin Gillár, said.

At the moment, the coverage is only available in the stations but in the future, it could be extended to the tunnels as well.

At the moment, Wi-Fi is only accessible in the tunnels of the new stretch of the A line from Dejvická station to Nemocnice Motol, which also has mobile coverage.

According to Prague deputy mayor Petr Dolínek, who is in charge of infrastructure, a pilot project introducing mobile coverage on route C of the metro could be launched in the future.

Expanding Wi-Fi coverage has been one of the priorities of Prague Public Transport Company. The company has already introduced a Wi-Fi connection in some of its new trams. By 2022, it hopes to have covered 60 or 70 percent of the tram fleet. 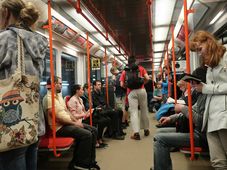