Sales of new cars in the Czech Republic are showing strong growth in the first half of the year. But local producers Škoda Auto and Hyundai have had mixed fortunes. Škoda has consolidated its position as local number one but Hyundai has slipped back. 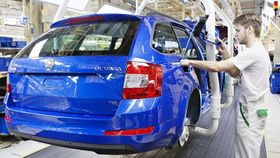 Foto: Škoda Auto The Czech market for news cars is not a major one, even for the leader local manufacturer Škoda Auto. But in recent years it has nonetheless been the scene of a bitter batter with Hyundai in particular seeking to erode Škoda Auto’s leading position and grab a bigger share.

Like many European countries, the Czech car market has been buoyant in the first half of the year. New car sales are at just over 113,200 units compared with the total of just over 192,300 for the whole of 2014. For every month this year sales have surpassed those for the same period in 2014.

But while Škoda Auto is not just holding its own but improving its market position with 32.24 percent of new car sales in the first six months, the latest figures look like a disappointment for Hyundai. The figures put it down in third place, trailing second-placed Volkswagen, with just 7.9 percent of the market.

Škoda Auto models are the first, second, and third top sellers on the Czech car market, the Volkswagen Golf is fourth, and Škoda Auto again comes in at fifth place. Hyundai’s best sellers, the i30 and 9x20 are placed sixth and seventh.

Now Hyundai, which was at one stage the second biggest local seller with around 11.0 percent of sales, does not quite agree with the sales figures put out by the Czech Association of Car Exporters. It says the figures are distorted by Czech bought cars which are then shipped out to third countries.

According to Hyundai, it still occupies second spot for sales with 9.8 percent of the market., an increase of 3.0 percent compared with the first half of 2014. Searching for the positive, it points out that some of its models are still the biggest sellers on the specific sections of the market such as sports utility vehicles (SUV).

Some analysts point out that Hyundai’s relatively poor sales figures come in spite of its high local spending on advertising and sponsorship. Some suggest that the negative tone of some adverts, which have in the past resorted to making direct attacks on Škoda Auto, have backfired badly. Others point out that Hyundai’s strong performance in the Czech Republic, it also has production plant at Nošovice in the east of the country, far exceeded its results in other European countries and its share is settling back to a more stable level.