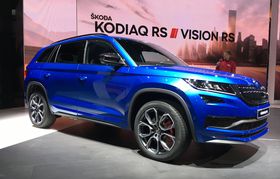 Škoda Kodiaq RS, photo: ČTK/Jan Sadílek The newly unveiled car is an SUV which comes both in a five-seat and seven-seat version, will be for sale from November. With the price starting at CZK 1,189 900, it is the most expensive Škoda car yet, beating the Superb Sportline 4x4 by CZK 84,000. According to Hospodářské noviny, the car will hit the Czech market at the beginning of 2019.

The Kodiaq RS uses a plug-in hybrid drive that combines a petrol engine with a capacity of 1.5 litres and a power of 110 kW (150 hp) with an electric motor of 75 kW, giving a combined 245 hp. Running just on the electric motor would give let the Kodiaq travel a maximum distance of 70km. There are also other environmentally friendly features in the car. For example seats made out of vegan materials and components made out of recyclable carbon.

According to the Czech News Agency the SUV segment of its cars is becoming an increased centre of focus for Škoda, which by August 2018 had sold a million SUV’s.

Year-on-year production of the Czech car manufacturer has risen up by 11.6 percent, when compared to the first quarter of 2017. Speaking ahead of the motor show that will be held in the French capital, Maier said that Škoda cars were selling especially well in France. Going on to say that: “In the first half of the year we delivered 25 percent more cars than in the year before.”

According to Hospodářské noviny however, Škoda faces the threat of a sudden fall in its operating profits. While last year it was as high as EUR 1.6 billion, this could halve in next two years. The paper believes that 2020 will be a critical year for the company, for while demand for Škoda cars keeps increasing, the manufacturer is hitting the limit of its factories production capacities.

Govt. advisor: Pandemic has forced us to increase digitisation – let’s embrace it fully