Czech company Škoda Transporation has won a tender to supply 80 trams to the German public transport company Rhein-Necker-Verkehr (RNV), which operates public transport in the Rhein-Necker region in south-west Germany. The first vehicle is expected to start operating in 2021. 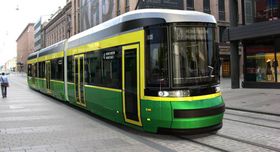 “It is our company’s biggest export tram contract ever, from both a financial and a manufacturing point of view,” Petr Brzezina, Chairman and CEO of Škoda Transportation told the Czech News Agency. “It is proof that our strategy of orienting to Western markets is paying off,” he added.

The ForCity SmartTrams, developed by Škoda Transportation’s Finnish subsidiary, Transtech, will operate in three German federal states: Baden-Wurttemberg, Hessen and Rheinland-Pfalz and will connect the cities of Manheim, Ludwighafen and Heidelberg.

There are currently 48 ForCity Smart trams of a similar type operating in Helsinki. Just last week, the company signed a contract to the tune of 750 million crowns to provide an additional 10 trams to the Finnish capital. As of 2021, they will also operate on a newly built track in the city of Tampere.

Škoda Transportation, which was acquired by PPF group in April this year, is one of Europe’s leading manufacturers of transport vehicles. Its key products include low-floor trams, electric locomotives, suburban train units, metro trains, electric buses and trolleybuses, and also control systems and powertrains for transport systems.

The Pilsen-based company has several subsidiary companies in the Czech Republic as well as in Germany, Finland, the US, Poland, Hungary and Russia and employs around 5300 people worldwide. Last year, it posted a clear profit of 712 million crowns.