The company Škoda Transportation has won a billion crown tender to modernize 93 rail carriages for the state-owned Czech Railways. The upgraded trains are to be used on the Prague-Hamburg line as of 2016 under a new contract signed with Deutsche Bahn. 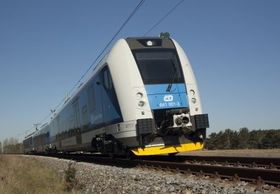 Illustrative photo: Škoda Transportation Škoda Transportation, which has concluded several significant export contracts in the last few years, can pride itself on clinching another billion-crown deal. A leader in the field of transport engineering, Škoda Transportation has beaten Slovak, Polish and Spanish rivals to win a tender to upgrade some of Czech Railway’s trains made by Siemens’ SGP in the 1990s.

The trains which can run at 200km per hour will serve on the Prague-Hamburg line and their upgrade will be the most expensive modernization project ever undertaken by Czech Railways. The company will pay 1.1 billion crowns for the modernization of 93 carriages, which is 200 million more than it expected. According to Škoda Transportation this is because the make-over will be extensive –some of the carriages will be fitted with barrier-free access for passengers with reduced mobility and a multi-function area for the transportation of a large number of bikes and prams. All carriages will have air conditioning, a Wi-Fi connection and each train will be equipped with an external and internal CCTV system.

The upgrade of some carriages will cost as much as 25 million crowns, which amounts to half the price of a new carriage. Under the conditions of the contract Pars Nova, which falls under Škoda Transportation, should conclude the modernization work by the end of this year so that the carriages can be put into operation as of 2016. Meanwhile, the company will have to push to acquire approval for the use of its 380-type locomotives on the Prague Hamburg line, which it has so far failed to do.

Škoda Transportation offers a wide range of products including low-floor trams, electric locomotives, suburban train units, trolley buses, traction motors and complete drives for transportation systems. Sales of the group amount to approximately 15 billion Czech crowns annually, and the corporation employs around four thousand people. It has several subsidiary companies and joint ventures not only in the Czech Republic but also in China, Poland and Hungary.