Some like it hot: Czech Republic sees rise in number of household saunas

Sauna sellers are experiencing something of a boom in the Czech Republic. In addition to the large number of public saunas, the number of families that are installing one in their home is going up. 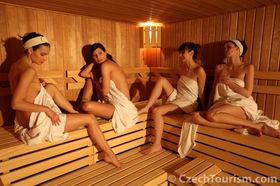 Photo: CzechTourism The sale of sauna systems is increasing nationally, up as much as to 10% annually, as confirmed by vendors’ statistical data.

According to the statistics, personal or private saunas are no longer bought only by home and garden owners. More and more consumers even opt for saunas on the terrace or even in the apartment.

One respondent told Czech Radio she had taken advantage of current offers.

"My husband and I got a sauna at Christmas, since there was a 50% discount. The sauna is for two people and can reach a temperature of up to 60 ° C ".

Attractive for sauna enthusiasts is both price and the general low cost of operation, according to one seller, Drahuše Vañková.

“The operational costs of saunas are not very high. That's why it's becoming increasingly fashionable to have a sauna at home. For example, an infra-sauna cycle, which is heated to about 60 ° C, costs around 40 cents. While the costs of a Finnish sauna cycle, which reaches up to 95 ° C, are between three and four euros.”

At public saunas, by comparison, visitors pay a fee between 4 to 15 euros per hour.

The president of the Association of Pools and Saunas, Pavel Košnár says the low cost is driving demand.

“I think the Czech Republic is one of the biggest ‘powers’ in terms of saunas worldwide. According to statistics from the Ministry of Health, there are 1,238 saunas in the country, not counting family saunas.”

He warned that amateur homemade saunas without certification are a major danger, which can have tragic consequences. Earlier this year in the region of Jičín, a woman died with her daughter after being trapped in a homemade sauna.