Agriculture Minister Marian Jurečka has confirmed that the state-owned brewery Budějovický Budvar will be headed by Petr Dvořák, until now global brand director at rival Pilsner Urquell. Dvořák will take up the post on May 1. He replaces the former head, Jiří Boček, who ran the brewery since the early 1990s but stepped down earlier this year for health reasons. 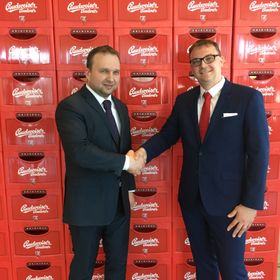 Marian Jurečka, Petr Dvořák, photo: CTK In the interim, the firm was run by economic director Petr Žáček. The minister indicated that the incoming director was the man for the job, with experience in beer production not only in the Czech Republic but also abroad.

The brewery Budějovický Budvar is nothing less than a national treasure, state-owned despite suggestions in the past of possible privatization – in fact, it is the last state-owned brewery in the Czech Republic. The state has held on in part to protect the name Budvar (Budweiser) contested for years internationally by Anheuser-Busch InBev. Ceske budějovice, where the brand originated has been brewing beer since the 13th century; the name Budweiser comes from the German name for the home town of Ceské budejovice, Budweis.

Lawsuits began way all the way back in 1907 and grew to more than a hundred international court cases over the years. The brewer is now the fourth largest brewer in the Czech Republic and exports to more than 70 countries. It was founded in 1895. Last year it sold 1.61 million hectolitres of beer, the most in the history of the company. Over the last decade or so, the brewery’s output increased by 40 percent. Further expansion of output will need new investment in infrastructure, which should be completed by 2020, sources report.