The Central Bohemian Office in charge of EU subsidies has called on the present owner of the Stork’s Nest Farm and Hotel Compound, Agrofert’s Imoba company, to return the disputed EU subsidy over which Czech Andrej Babiš faces charges of EU subsidy fraud. The company says it is consulting the request with lawyers. 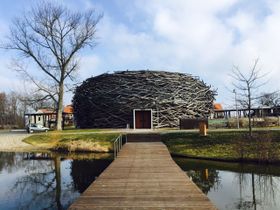 Stork’s Nest, photo: Filip Jandourek One of the pet projects in the prime minister’s enormous business empire Agrofert, the Stork’s Nest Farm and Hotel Compound, are at the centre of a drawn-out scandal surrounding the Czech head of government. In 2007 the company running the Stork’s Nest Farm and Hotel Compound left the Agrofert business conglomerate, then run by Babiš, and changed its status to a joint stock company with bearer shares. In 2008, it gained a 50 million crown EU subsidy designated for small and medium-sized companies – before re-joining Agrofert a few years later.

The prime minister, who later transferred his whole business empire to a trust fund in order to avoid conflict of interests, now stands charged with EU subsidy fraud over the suspect transaction, as does his wife, brother-in-law and two adult children to whom he transferred the shares of his Stork’s nest company in 2007.

The Stork’s Nest Farm and Hotel Compound is now owned by Agrofert’s Imoba company and the Central Bohemian Office which granted the subsidy has asked Imoba to voluntarily return the money within 30 days.

Agrofert has confirmed receiving the request, telling the ctk news agency that Imoba is consulting the matter with its lawyers and will not comment on the matter for the time being.

Agrofert insists that the subsidy was drawn in accordance with the law, which it says several inspections confirmed.

Seven people are charged in connection with the case, among them the prime minister and close family members. The charges against four others, also believed to have been involved in the case, have been withdrawn. The prime minister maintains he is innocent of any wrong-doing and will clear his name in court. The case has thrown a long shadow – impacting the forming of the country’s future coalition government.