Raising the minimum wage tends to have a knock-on effect of higher unemployment. However, repeated increases in the minimum wage in the Czech Republic over the last few years have not that impact, suggests a new study published by the think tank IDEA, which is part of the economics institute CERGE-EI. 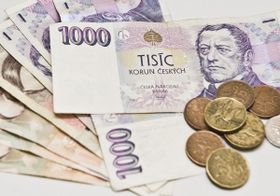 The report says that these repeated increases had a positive effect on the growth of wages in low-paying sectors, meaning pay packets that are slightly above the minimum.

The study’s co-author Professor Štěpán Jurajda told the news website iDnes.cz that the jump in the minimum wage had caused low-income salaries to grow by at least one more percentage point than they would have otherwise, by 3 percent rather than 2 percent.

This swelled the wallets of unqualified staff working in such fields as accommodation, catering and building maintenance.

However, there was one year in which a minimum wage rise did cost jobs, 2013, when the lowest paid began taking home an extra CZK 500 a month. The study suggests that employers may have let people go in the wake of the first minimum wage increase in anticipation of further such jumps.

The country’s trade unions are pushing for another minimum wage rise in 2020, an unprecedented hike of CZK 1,650 from the current level to CZK 15,000.

However, the president of the Czech Chamber of Commerce, Vladimír Dlouhý, has warned that with the country’s economy starting to slow such a rise could prove detrimental.

The Confederation of Industry argues that minimum pay ought not to increase by more than 5 percent, or CZK 700 monthly. For their part the unions say the minimum wage in the Czech Republic is among the lowest in the European Union.

The IDEA report suggests that further increases could in fact lead to higher jobless rates.

Mr. Jurajda told iDnes.cz that the main issue was uncertainty over what kind of agreement the tripartite – government, employers and unions – would come to, rather than the figures involved.

The predictability of minimum wage development is more important to businesses than the precise amount employers must pay, the economist said.

The average monthly salary in the Czech Republic climbed to CZK 31,885 last year, with two-thirds of employees receiving less than that amount.

At present the minimum wage – which is received by around 150,000 people – is equivalent to 41 percent of the average wage, iDnes.cz said.

The Czech Republic has one of the lowest unemployment rates in Europe. It stood at 3 percent in March of this year.