TATRA TRUCKS rise from the ashes following its predecessor’s bankruptcy seems to be continuing at a steady pace. The company already announced at the beginning of August that it had sold more vehicles in the first half of the year than expected and raised its profits estimate for the full year to 3 billion crowns. TATRA TRUCKS also says it has almost sold all this year’s planned production plan of 745 vehicles and expects to be capable of overshooting its 2014 target by an extra 30 to 50 vehicles. Photo: archive of TATRA TRUCKS In its latest format, TATRA TRUCKS is a newcomer founded after its predecessor Tatra a.s. filed for insolvency last year. Owned by Czech businessmen Jaroslav Strnad and René Matera since April 2013, the truck maker nevertheless sees itself as the follower of a brand whose history spans more than one hundred years. And it now seems to be slowly recovering from years of financial uncertainty caused by complicated ownership and the impact of the financial crisis.

Soon after the takeover, a strategy of cautious and targeted production was chosen by the company’s new management, which says it aims to exploit gaps in the market and focus on producing what they say TATRA does best – manufacturing heavy off road trucks. The plan, which also saw over 100 workers being laid off in a bid to increase output efficiency, seems to be working. The company last year hit its highest vehicle production volume since 2008 and has succeeded in regaining the confidence of suppliers and rating agencies.

TATRA’s main clients continue to come from the military, construction and mining sector, with over two thirds of orders coming from outside of the Czech Republic, including many from the former Soviet bloc. The manufacturer’s press secretary Andrej Čírtek said Russia was one of the company’s main clients with potential for further growth. According to him the recent tit-for-tat sanctions between the EU and Russia haven’t impacted the company heavily, but could hinder expansion in the future.

One of the main successes the company has achieved since its restructuring is a recently agreed deal with the Saudi Arabian army worth 4.5 billion crowns. TATRA’s will not supply finished trucks but will instead send parts to a newly opened assembly plant in Saudi Arabia where they will be put together using workers trained in TATRA’s plants in the Czech Republic. The deal is part of a larger trend, Čírtek says, which will see vehicles being assembled in the country of their destination.

In spite of the upbeat tone, the market for off terrain trucks has shrunk in the past decades. Current world production is around 10 000 units, which is actually close to the number that the TATRA plant alone was producing back in 1989. Čírtek stated that one of the main reasons behind this, is improved infrastructure and better roads in many parts of the world. This has led to a lesser need for such vehicles. However, he says there is still considerable potential for TATRA in the construction and mining industry as well as military contracts. 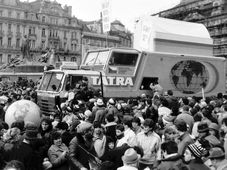