Third of Czech restaurants do not respect allergy labelling law

Ten months after a new law on allergy labelling went into force, a third of Czech restaurants and delis are still failing to fully comply with it. The Food Inspection Office says that 37 percent of restaurants and eating places recently inspected either failed to provide the respective information on their menus or only gave it on request. 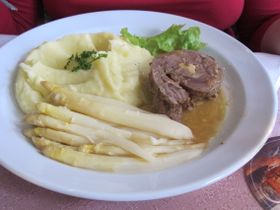 Photo: Ivana Vonderková The law on allergy labelling which went into force last December aimed to bring Czech norms in line with EU standards. According to the legislation food businesses are bound to provide information relating to 14 of the most common allergens, including eggs, milk, fish, molluscs and nuts. While producers of pre-packaged foods met the requirements almost right away restaurant and deli owners are still boycotting the new norm in smaller or larger degree.

Unlike food producers who had to meet strict requirements with regard to the information given and the minimum font-size used on their labelling, restaurant owners had much more leeway in how they were going to warn their clients about allergens in food. The result is that a third of them have made little effort to change their set practice and provide clients with information regarding even the basic allergens used. Chefs argue that putting the information on menus is obtrusive and confusing for their diners who are generally not interested in the individual ingredients of their dishes.

Some restaurants offer the information on request, in others inspectors not only failed to find it on the menu but failed to get the information they asked for from the waiter. Even respected chefs in reputed restaurants are balking at the new norm, saying they will not spoil their menus by adding the presence of 1-14 allergens next to the name of a dish. Others use numbers, but say this is confusing for some visitors and so they have two menus – their regular one and an allergy one that is given on request. The head of the Association of Hotels and Restaurants Vaclav Starek defends these eating places, saying that the vast majority of clients are not interested in the information provided or even ask why chefs put allergens in food in the first place.

Despite continuing opposition from some quarters, the Food Inspection Office is determined to keep the pressure on until the norm is properly met, be it at a street corner eatery or five star restaurant. No-incident relating to an allergy problem has so far been reported but inspectors say that this is largely thanks to allergy sufferers who know the situation and choose their dishes carefully or, if they have a serious problem, avoid eating out altogether.