The number of Chinese visitors to the Czech Republic has been rising fast in recent years. Now Czech tourist industry groups want to encourage them and other non-EU tourists to spend more when they are here – by offering them greater VAT returns on goods bought during their stay. 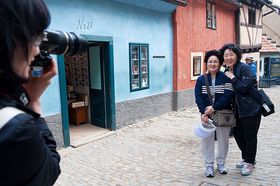 Photo: Tomáš Adamec At present visitors from China, Russia and other non-EU states can apply to get the VAT back on all purchases made in the Czech Republic at a value of CZK 2,000 crowns or more.

Now associations involved in incoming tourism are lobbying for that amount to be cut to CZK 1,500, iDnes.cz reported on Monday.

If the change were made, tourism bodies believe it would lead to a marked uptick in how much such visitors leave in the country, the news website said.

A study produced by the Czech Chamber of Commerce suggests that the move would leave a hole of CZK 30 million a year in the state coffers.

But that is a small amount when set beside the CZK 1 billion that tourists now get back in VAT annually, according to the study.

The study’s authors believe the idea would above all have a psychological effect. Thanks to the overall sense that good deals are to be had in Czech shops, non-EU visitors would spend an extra CZK 150 million a year, they say.

What’s more, the number of jobs in tourism would grow because of the impact on the grey economy, which would suffer as documentation would obviously be necessary to get the VAT back, the report contends.

It also claims that reducing the limit would serve as a buffer when the Czech National Bank ceases its weak crown policy, probably next year. However, the tourist associations’ idea has a major opponent: The Ministry of Finance. Spokesman Jakub Vintrlík told iDnes.cz that the ministry is against reducing the limit as it sees no benefit to it.

According to the Ministry’s calculations, the move would cost the state at least CZK 250 million. In addition, such tourists tend to buy luxury items which go for considerably more than CZK 1,500, so it would be of little benefit to retailers in any case, they say.

However, a representative of crystal producer Moser said visitors spent an average of CZK 1,730 on small gift items at its stores in Prague and Karlovy Vary.

Retailers also argue that they need to compete more with outlets in other states. Germany returns VAT on all purchases made by non-EU tourists, while states such as Poland have lower limits than in the Czech Republic.