Tourists in Prague in the summer generally aren’t afraid to splurge during their holiday but a study by Prague City Tourism suggests that visitors this summer were a little thriftier than the last winter season. Aside from transportation and accommodation, tourists spent the most at restaurants, but a touch less than in the past. 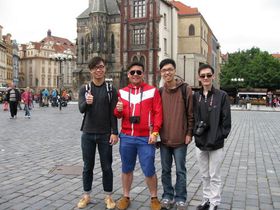 Photo: Karolína Rezková According to Prague City Tourism, visitors to the Czech capital this summer were a little more careful when it came to spending than at the beginning of 2015. Likely reasons? More expensive transport to the Czech Republic, the news website iDnes reported, as well as pricier accommodation. Whereas in the winter accommodation for a brief stay cost on average 3,460 crowns, the price in the summer (understandably more popular for many) climbed to 3,740; the average cost of travelling to Prague in the summer was more expensive too: an average of 4,430 crowns, almost 1,000 crowns higher.

Higher costs then likely impacted money spent on food & drink as well as culture and gift or souvenir items. According to the numbers cited by iDnes, visitors on average spent around 450 crowns per day in restaurants (a hundred less than in the winter) and just 242 crowns on gifts (down from 573 crowns).

In July, the average cost of a full stay in the capital cost tourists the equivalent of almost 12,000 crowns. In terms of spending, Russian visitors continue to spend the most of all visiting nationals, both in the winter and summer months, though in the summer, they too reeled in spending somewhat. In the winter, Russians spent, on average, 3,190 crowns per day while in the summer it was 2,308 – according to the study.

The second and third-biggest spenders in the winter, according to Prague City Tourism, were the Chinese and Japanese, while in the summer those titles went to Israeli and Ukrainian citizens.

According to the Czech Statistics Office, the average length of stay in the Czech capital is three nights – a stable number over the last few years. Many tourists, foreign as well as Czech, the news website iDnes noted, usually opt for cheaper hotels or bed & breakfasts: most see no need to spend extra, perhaps putting stock in what they experience while in the city, and not spending needlessly or beyond one’s means.