2009 has been a rather mixed year for Czech sport. Perhaps the biggest single story was the national soccer team’s failure to reach the World Cup, despite having a relatively easy group on paper. The Czech men’s tennis team, meanwhile, went on a remarkable run in the Davis Cup, only to lose to Spain in the final. And in athletics, Barbora Špotáková took the Czech Republic’s only medal, silver in the women’s javelin, at the Athletics World Championships in Berlin. 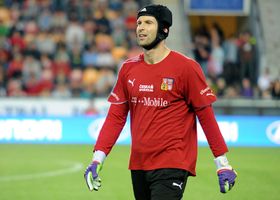 Goalkeeper Petr Čech, photo: Filip Jandourek / ČRo The Czech Republic had a less than ideal start to their qualifying campaign to reach the 2010 football World Cup in South Africa, taking just four points in their first three games. From that point on they struggled to make an impression on what looked a relatively easy group on paper. Coach Petr Rada was replaced by another unlikely choice, František Straka, though the latter lasted at the helm for only one game, a friendly. In the end new Czech football association president Ivan Hašek made himself national team manager after his election in July, but even second place and a berth in the play-offs proved too big an ask for his charges. After the final game – a dull 0:0 draw with Northern Ireland – I asked Czech goalkeeper Petr Čech where he thought it had all gone wrong.

“We didn’t start well. We drew with Northern Ireland and then when we lost to Poland we had a spell of two or three games when we didn’t play well. And another draw in Slovenia…I think it was too costly for us. We dropped too many points at the beginning and then over the last four games [after the appointment of Hašek] we did our best and were chasing results, but it was too late. So I think, you know, having made four draws in one qualifying campaign, it’s too many.”

Soon after that game in October Michal Bílek was named new manager of the Czech international team.

In the Czech league, Slavia Prague were crowned champions for the second year in a row, the first time they had won back-to-back titles since the 1940s. Otherwise, the Czech cup was won this year by Teplice, and not for the first time there were no Czech teams left in European competition at the end of the calendar year.

In ice hockey, the Czechs could only reach the quarter-finals at the World Championship in Switzerland. At that point they were knocked out by Sweden, just as they had been in 2008. The Czech Republic’s elite league the Extraliga was won by Karlovy Vary. The biggest story in the Extraliga this year was probably the return of legendary goaltender Dominik Hašek, who again came out of retirement to join his hometown club Pardubice. Hašek turns 45 in just a month’s time.

The Czech men’s tennis team went on a fantastic run in the Davis Cup, beating France, Argentina and Croatia to reach the final for the first time since Czechoslovakia won the prestigious competition in 1980. However, they proved no match for a Spanish team led by an in-form Rafael Nadal; the Spaniards took just three matches to overcome the Czechs in the best-of-five final earlier this month. When the Czech team arrived home at Prague airport the day after that tie, I asked key player Tomáš Berdych for his thoughts on the Davis Cup result. Tomáš Berdych, photo: Christian Mesiano, CC 2.0 license “If I’m going to look at the situation in general and in the past I would say that it’s a really good achievement, especially for Czech tennis, because it’s after 29 years and I’m really happy about that. But on the other hand we went to Barcelona with a little bit bigger expectations. But as we saw, the Spanish team is really the best in the world. They just proved it and they played fantastic, so all credit to them – they just deserved to win.”

Berdych is now ranked 20th in the world. The Czech number one Radek Štěpánek, who at 31 is rather more experienced than Berdych, is now up to a respectable 12th in the international rankings after a year he can be satisfied with. Štěpánek was particularly impressive in early part of season, when he won two ATP titles, in San Jose and Brisbane.

The 2009 World Athletics Championships were held in Berlin, meaning Czech fans didn’t have too far to go to support their team. However, they had little to celebrate, with the only Czech medal going to Barbora Špotáková. She took gold at the Olympics in 2008 and holds the women’s world record in the javelin. However, Špotáková failed to repeat her Olympic success in the German capital and had to settle for silver. She told me that all things considered she was satisfied with her own performance, though the poor showing of the Czech team was a disappointment.

“I didn’t expect such a bad…performance. It seemed to me that we weren’t lucky. We were lacking good luck. The atmosphere was getting worse and worse during the championship, I can say. The Germans were celebrating more and more, and we were getting lower and lower. That’s how it felt to me. I was happy to leave there. Next year it’s going to be better.”

Barbora Špotáková was the 2008 Czech sportsperson of the year. That crown has gone this year to Martina Sáblíková, at 22 already the greatest Czech speed skater of all time. Sáblíková took two gold medals this year at the Speed Skating World Championships and is one of the Czech Republic’s leading medal hopefuls for February’s Winter Olympics.

Finally, hats off to the veteran jockey Josef Váňa, who this year won the Velká pardubická steeplechase for the sixth time, on Tiumen. Váňa, who is 56, is nothing less than a living legend of both Czech and international horseracing.