Prague’s Divadlo na Zábradlí is known mainly for staging former President Havel’s plays but in the last couple of years, it has also focused on producing English-language plays. Thursday will see the premiere of a play acted in English with Czech subtitles on the theatre’s main stage. The play, written by a young Polish author Dorota Maslowska, has a rather complicated title: A Couple of Poor Polish-Speaking Romanians in English with Czech Subtitles.

A Couple of Poor Polish-Speaking Romanians is a play set in contemporary Poland. Two young Poles, Dzina and Parcha, have been to a party, dressed as Romanians. Still high on drugs, they set on a hitchhiking ride through Poland, meeting an array of bizarre characters and revealing the prejudices and frustrations of their country. Director David Peimer says the play should strike a cord with the Czech audience: 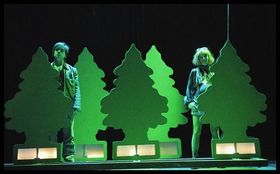 Jiří Mádl and Teresa Branna, photo: www.nazabradli.cz “I think the reason the theatre chose the play is because they feel Poland, the Czech Republic, Hungary and all the ex-Soviet satellite countries are undergoing similar changes. These young people were three or four years old when the Revolution happened so they chose it to see if they can connect to a younger audience and show the generational conflict. They chose it thinking that it doesn’t have to be Poland, it could be anywhere else and it doesn’t have to be Romanians, it could be Gypsies or someone else.”

Even though there are Czech subtitles on the stage, Peimer wanted to make sure that people who use English as a second language would understand as much as possible and worked with the actors on slowing down the pace of their speech so it would be easier to follow. But why did the theatre choose to stage a Polish play in English when it was already translated into Czech? David Peimer again: Anna Vítková, photo: www.nazabradli.cz “I think that Theatre Na Zábradlí wants to experiment, be innovative, take artistic risks, artistic chances and try something new and different instead of doing something predictable or safe.”

The cast of the play is truly international, with actors from the Czech Republic, Britain, America and Australia. So didn’t the foreigners find it difficult to relate to a play set in a post-communist country? Nicole Grisco is a young actress from America. 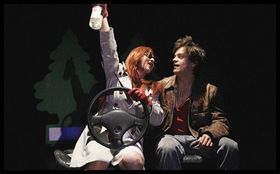 Marta Vítů and Jiří Mádl, photo: www.nazabradli.cz “The history of communism and being raised in that environment is difficult to understand for me but I think there is always a difference between generations; that your parents and grandparents don’t necessarily understand where you are coming from, why you listen to that music, why you dress or talk that way, so that part was good. The accents are difficult to pick up for an American.”

A Couple of Poor Polish-Speaking Romanians in English with Czech Subtitles will premiere on the main stage of Divadlo Na Zábradlí on Thursday. 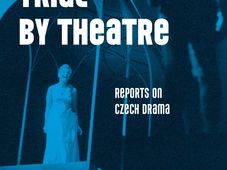 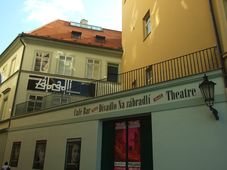 A Stage for Revolution 1

The date is Tuesday 19 October 1965 and we are in Prague. A 21-year-old British girl has just got off a train at the Art Nouveau building… 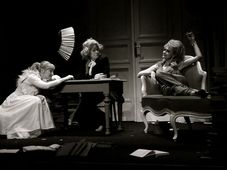 If Virginia Woolf, Sylvia Plath and Ivana Trump were locked up together in one room, what would happen? In the world of theatre, anything…